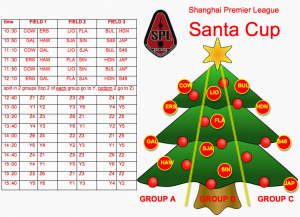 The good thing about the SPL players is that they all love soccer. Whenever you organize a soccer event you are sure they will come. The Santa Cup 2011 saw 12 teams with players from all over the world battling for the glory. Each team played 8 games on the day and at the end were split in two groups of 6.

The Plate Group was fighting for the 30 Liter Free Beer kindly provided by the Shanghai Rugby and Football Club. It was a close race as the Hawks almost got it but fell short by one point only ! Japan won it with 13 points out of 5 games god bless they had a team bus driving them back !

The Santa Cup Group’s winner was decided in the final game. It became an interesting story perfectly put into scenario by Steve the manager of the Hard Days Night. Friday before the start of the Santa Cup he was spreading around emails that he hardly had a team and on the day of the Cup he claimed half of his team was stuck in Puxi and asked for postponement. Meanwhile Mus the oldest Lion around was snatched as goalie after paying him an undefined amount of money. So the final result they played 8 games and conceded only one goal (a penalty) with only 8 players and became the Santa Cup winners 2011 ! Great story and well done to them !

You will get a CD with all the pictures of the Cup and we are already working on the Santa Cup 2012 organization !

Now its time to say goodbye to 2011 and we don’t do that before we say a big THANK YOU to all the people who have made 2011 a roaring success for the SPL !

We hope we can keep our SPL Spirit Strong in 2012 and wish everybody a healthy and prosperous 2012 !

See you all next year !