It was our second last game of the season and we were up against the leader of the SPL ERS who only lost two games this season ! As our game on Saturday was an exhausting affair and with so many injured players we had no choice to call on to our youth players to help out. Dim was kind enough to stay back as goalie and we had Rick (16) and Prentice (16) and Chris (15) and Elijah (15) and Max (18) in our squad !  We are not sure whether ERS was nervous or under estimated us but our defense was solid with Ingven and Garret and Francois and Mathias and our youngsters created havoc especially Elijah caused a lot of trouble for the ERS defense. It was a long ball from Dim which put him alone for the ERS keeper and he calmly scored and gave us the lead. ERS got a goal back when we couldn’t clear the ball in defense. Champions luck played part in the second ERS goal as missed cross flew over the top in our goal ! However we showed spirit and never gave up. Just before half time after a free kick and an assist from Elijah Francois blasted the ball in the net to make it 2-2 at half time. In the second half we played deeper but were still dangerous on the counter attack. ERS got more frustrated that they couldn’t score more goals and knew they had to beat us to stay on top of the SPL. It was a blast of Charles after another Elijah assist which according to himself caused a hole in the net that gave us the lead ! We soon added our fourth cool finished by Nicolas much to the pleasure of the Marlin players who were watching from the side as they were second in the SPL. ERS did get one goal back to make it exciting for the last 10 minutes but our defense was solid like a rock yesterday !

Great combination of experienced players with fearless young players ! It was a joy to watch it from the side line !

Well done everybody ! One more game versus Japan at Century Park lets enjoy that too ! 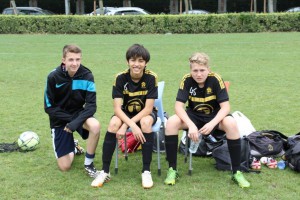 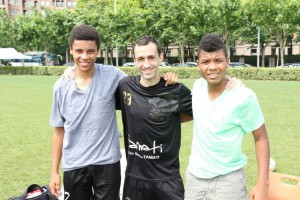 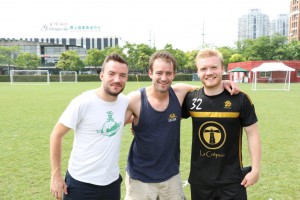 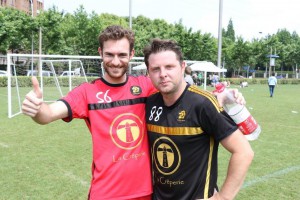 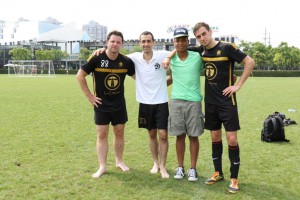 Looking at our Chinese opponent on Saturday it was a miracle to see how they always seems to be able to line up the best of the best when they play the lions. Despite they are in the bottom of the league with only 8 points it felt like we were playing DIB !

The first half was hard as we hit the cross bar and the post and we had a few more chances. It looked like we were running out of luck and it even got worse when Patrick was sidelines after a reckless tackle of a Long Tang player. Scan in the hospital one day later showed that two middle bones were broken and had to be fixed by plates. Very sad for Patrick as his season is over after all the hard work he did for the Lions on the midfield this season !

As we knew we had to win this game to stay clear on the top of the league we had a serious and hard half time talk. The bottom line is that all the players had to step up their game and work and fight harder. With Benji as assistant coach on the side line we did just that and everybody was fighting to get the goal ! It came from a cross of Azzeddine which found Danni and he was relieved to see his effort flying in the goal. Now it was up to our defense to keep the Long Tangs from scoring. They did a fantastic job although in the final minutes Kevin the ref gave a dubious free kick to Long Tang and they hit the cross bar. For once we were lucky on the day ! It was a hard fought 1-0 victory which keeps us on track with only two games to go.

We wish Patrick a speedy recovery and our next game is Saturday 1100 kick off versus Long Tang again ! Please all come out and support us in the final games of the season ! 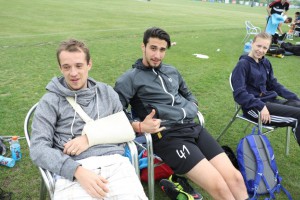 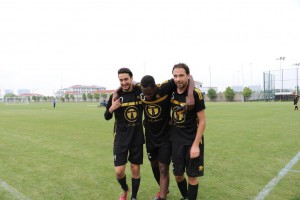 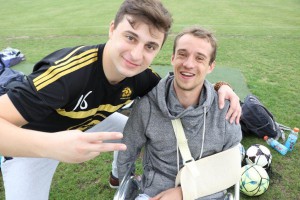 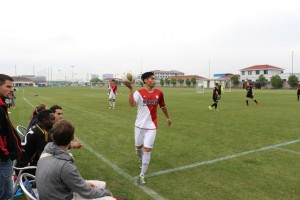 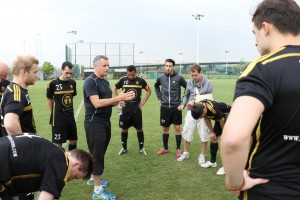 It was a beautiful sunny day in Waigaoqiao with 25 degrees and pollution free ! The lions showed up with a motivated squad ready to step it up after their good performance against Re-United last week which won us the Cup.

However in the first 20 minutes the Lions started slow and were sloppy in the final passes and finshing.

Step by step the Lions upped the tempo and came closer and closer to the “Oranje” box.

After good pressing and a quick ball recuperation in the midfield theLions went quickly up and found Romain on the back post…1 – 0 for the Lions.

Then Lions stepped up their game  and started to play faster and faster. Oranje couldn’t follow the rythme and the pressure… Result is that Lions scored 4 more goals before half time through Azzeddine, Tomas and Danni.

It is important to note that  2 assists were made by Radouane our goalie !

In the second half the Lions substituted players and the pace of the game went down but we played on quick counter attacks to score three more additional goals.

Lions were able to add 3 goals and finalize the game with 8 goal and  a clean sheet. 3 scored by the MoM Tomas, great way to celebrate hi birthday !

Only negative point of this game is the shoulder injury of our captain Benji in the second half due to a late contact with an Oranje player. We hope he can recover fast to be ready for the last games of the season !

With over half of the regular players missing we knew it was not going to be easy. Especially not when three players were not there at the 1100 kick off time / so we started with only 11 and were happy that the speed of the game was not so fast….! It was from a corner that Dan our solid defender scored with a header that gave us the lead 1-0. Super 48 had a few very good players and there was no way we could take it easy in this game. Their best player was their fast forward and he scored a great lob over Thierry on a counter attack. Slowly when we finally had our squad together we started to play better. It was in the third quarter that we did the damage to Super 48. First Michael blasted the ball in the left corner and right after that Fred our Captain got the goal he had been waiting for months, a beautiful blast in the right top corner. We lost Alp on the way to the 4th quarter and Super 48 scored one goal back to make it 3-2. Compliments to them for their fighting spirit but our inform goalie Thierry helped us to seal the 3 points in the end. He received the MOM award and Olivia who had an outstanding game received the LOM award. The beers tasted good after the game and we are back in action in two weeks !

It was a beautiful day on Saturday ! Blue sky and 25 degrees perfect setting for our cup final against Reunited. Sometimes you can sense during the warming up how the team is motivated and this time all Lions were ready for it. We wanted to make up for a bad 30 minutes versus the Shooters. It was good that Lions Legend Jerome flew in from Bangkok to support us and Mus as well was back as supporter !

We took the initiative straight from the kick off and tested the Reunited defense a couple of time. Azzeddine almost nailed it when he sliced their defense open and Danni also came very close. In the end the Reunited had no other choice but to foul Azz to prevent him from scoring. The free kick was at a dangerous spot and the Reunited decided to cover the left side of the goal but he had no chance when Azz kicked the ball perfect in the right corner. The Lions didn’t stop here and within a few minutes a through ball from Azz put the soon the be father Mathieu alone for the keeper and he had no problem to score the 2-0 ! At half time there were praises for the Lions team work and display of football but also a warning that we still needed to play another 45 minutes. We knew we needed one more goal to be sure to win the Cup and tried hard to get it. Azz got a great chance but his lob over the keeper was saved. In the last 20 minutes Reunited pushed forward end the Lions got some tired legs but we had a great motivated bench to help out. Danni got the last chance of the match but also stranded at the goalie.

After the final whistle there was joy and happiness as nothing is better than winning a final ! We knew that we still need needed to stay focused to win the SIFL title and the SIFL Cup but nonetheless we did celebrate it until. First we had a great dinner outside at our sponsor “ Le Creperie” and after that the Lions disappeared in the night scene of Shanghai !

It was a great team performance and it showed that we are still hungry for titles !

Next up we will play the Dutch in the league on Saturday.

On Sunday we played an equal match against the Marlins for about 30  minutes but after that it was downhill for the Lions. The Marlins still fighting for the SPL title proved to be more hungry and clinical in front of the goal. Ethan who played his last game for the Lions had an outstanding game despite the goals conceded. One of his saves was dubbed by the Marlin manager as one of the best saves he had seen in Amateur football. Maybe it was part due to the hangover of the party night before or the fact that we are out of the race already but this was a game to forget. Let’s put out a better performance in our last two games of the season !

Let’s all come to the training to stay fit and focused for the last games ! 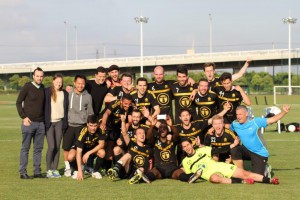 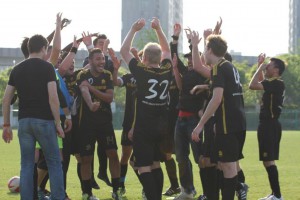 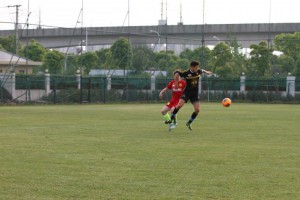 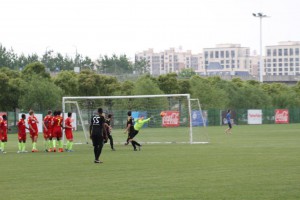 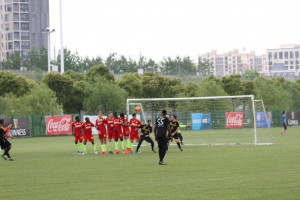 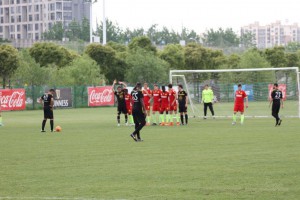