Yesterday Sundat Sept. 27th, we had our 3rd official SPL game vs ERS at 4pm in Century Park.

Just before our game, we saw the Marlins lose 4-1 to Century Park FC and they honestly could have easily lost like 7 or 8-1 from what we witnessed…the youngsters of former Shanghai 2000 just killed the older/slower Marlins/Shooters players… Marlins dropping points was a very good operation for us, provided that we won our game against ERS…

Only President Freek and co-coach Garret were missing, otherwise on a perfect pitch/weather conditions, we had a full squad of 14 hungry Lions, eager to avenge our honor after last game defeat vs Krauts….

Pat L., Farid K, Aki, Francois L and Simon new girlfriend came to support us, thanks to them again !!!

For the occasion and with a line-up of mainly offensive players, we changed our formation to 4 -5-1, which appeared to be extremely fruitful, as we completely dominated the game in every line all match long. It is new comer Felix who was just subed from Benj about 30mn from the start who scored after a genius pass through the whole ERS defense from Az…That was just the beginning of the ERS nightmare….Az was on fire and blasted another goal in the top left corner soon after, making it a 2-0 lead at half-time.

We all decided that 2-0 wasn’t satisfactory at all and set our mind to finish the ERS off in the second half. We operated a couple of substitutions : Nico C. came in left mid for Chris B. and new comer James T. came in forward for Thomas C. We took again the control of the game, barcelona style and ERS never really stood a chance, as the balls were very rarely coming to their only striking force Kevin, as our Viking stopper Yngve made it impossible for him to get any ball at all…Heard Kevin is now thinking of playing in the midfield…

Anyways, goals came from James T, an own goal, Az, then Nico C. took an orgasmic pleasure to score against his former teammates…(Nico only scores 1 or 2 goals per season and only vs ERS…)

We ended the game with an ass slap 6-0 and a clean sheet !

We saw some of the ERS players crying and running in the woods of Century Park after the game and we heard later on that a big fire took place in the Park….strange…

The spirit was there, we played well tactically and techincally, a game to remember and to take as example…Well done everyone !

Next game will be on Oct. 11th at 3pm in WGQ versus Gremio FC, please register asap and come to training on wed. !

Our partners YEYU finalized the video of our Sept. 5th 2015 tournament: the LIONS’ Cup, so here is the link:

The weather was incredible with a rare clear blue sky and 25 degrees ! We played on the New Bund facility which is still a challenge form some to find it but in the end we managed it with 12 players. Several regulars were missing but it gave playing time to our younger Lions. The first half we adjusted to the slow speed of H Stone a Chinese team who made their debut in the premier league. They had no intention to play open and attacking football instead they defended with the whole team. The Lions did get three good opportunities but there was no sharpness in front of goal. In the second half we picked up the pace and we started to control the game. The youngsters put more aggression in their game and Chris Bonner (16) opened the score with a header. Soon after we should have gotten a penalty as Chris was fouled in the box but the referee who later apologized for not given the penalty, decided to play on ! Felix another young Lion took the second goal after a good cross in from Chris and to finish it of Azzeddine blasted the 3-0 in the net. Overall it was a good second half where our goalie Radouane and our defense stayed focus to be sure to keep a cleansheet. Our next game will be the big one versus the Shooters on October 17th.

Lets all come to training to work on our fitness and team play ! 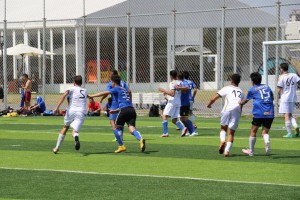 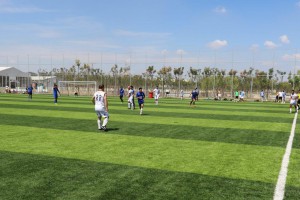 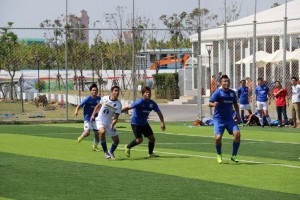 It was a beautiful day and the team looked sharp and fresh under the supervision of Charles and Garret. It was great to see that many other Lions came over to Jinqiao to support to team. In the first half and hour we dictated the game and managed to keep the Krauts away from our goal on the other side we got two or three golden opportunities to take the lead. As it goes in football if you fail to score on a few occasion the opponent will take advantage. We got a 10 minute melt down just before half time with Stat the last couple of years SPL top scorer who ripped open our defense and caused trouble for our keeper. Before we knew it we were 3-0 down and everybody knew that I would be hard to come back in the game. However we showed good spirit in the second half we were fighting for every ball and came close on several occasions. The Krauts used their physics to defend and could only stop our play by fouls. Charles scored on a cross from Kevin, but our attacking play left our defense exposed and Stas took adavantage again. In the end the 4-1 defeat was harsh on the Lions but losing is part of the game. All Lions came afterwards to Latina for a beer and that’s the spirit you win and lose as a team !

Next game in two weeks will be ERS so all Lions lets attend the training on Wednesday and work on our fitness and team play !

it seemed hard on the day to get a full Lions squad out but it gave playing opportunity to new players and very young players ! Simon suddenly realized he was the oldest Lion on the pitch as long as the President himself didn’t enter of course….! The rain stopped and the start looked promising beating Voodoo Child 2-1 in the second game we beat H stone the new first division team 3-0 next up was 3united and again a good performance with solid defense 2-0 victory. Last in the group stage were the Anzacs and although we were already qualified we still managed a 1-0 win. After the break we would either face the Azzurri or the Shooters and we knew it woud be a different game. It was the Shooters with a 16 players squad vs our 8 youngster. Beforehand we explained about the physical tactics of the Shooters and it proved to be hard for us especially on the wings the Shooters found space and came close a few times / They clinched the 1-0 after we failed to mark our players after that it was the Lions pushing forwards and came closest by a free kick which was saved by Chris Banner. Despite the disappointment afterwards we did gain valuable experience !

Having won the Shanghai Masters over 40 tournament 3 times we knew how hard it would be to achieve the same again. A good start is essential in a 7 aside tournament but the Legends were for some reason not ready and not in the right form. They lost two games and that basically put them in the plate competition. They did win their first game against Beijing of the plate 2-0 on Saturday and on Sunday a started to look a bit brighter. A last minute header from Laid gave us another win over Super 48 and our next opponent was Hangzhou who beat us on Saturday it was a good battle with both teams trying hard to score. It was a unfortunate handball of Dan that gave Hangzhou a penalty and the only goal. Up next it was a must win for us and that’s what we did 5-0 win versus the Vikings tasted good. Our last plate game was against the Bangkok team and again we scored plenty of goals as we won 5-2. We made it to the plate final and actually were happy to play the final despite our heavy legs we were up against Hangzhou again…… the third time and we were determined not to lose again. It was a hard battle with left and right some fouls from both teams this time the Legends got lucky after a handball from the Hangzhou defender and Fred converted the penalty. We were very close to win the final but in the last minute conceded a foul at the edge of the box and somehow the Hangzhou player found a hole in our wall and equalized. It ended with a penalty shoot out which was good for the spectators of course but not for us as our third penalty was stopped by the Hangzhou keeper.

Overall we had a bad Saturday and a good Sunday so mixed feelings ! The Shooters won the tournament in the end on penalties and our congratulations goes to them ! We will try harder next year to get the Cup back !

Our 3rd Lions’ Cup tournament on Sept. 5th 2015 was a complete success!

We had 20 teams total, coming from 5 different cities of China and hungry for football, who made it to the New Bund Venue on Saturday Sept. 5th 2015 morning, despite the pouring rain in the morning!

We started a little late due to the rain, but we managed to make up the time later on, with the weather clearing up…

The round Robin stages ended just before 1.15pm, leaving 20mn for a well deserved lunch break, where all the participants enjoyed some good quality food at our F&B Partner for this event:PLANET KEBAB.

All the morning games were played in a exceptionally great spirit, with a lot of nice goals and people jsut enjoying to play on the brand new best artificial football fields of the New Bund club in Shanghai.

The afternoon finals saw some very good quality football games happening, with good battles being fought under the eyes on our 4 referees team, who did a great job. Kevin, the head ref, said according to his wristband, he ran 25K during the day! Quite impressive!

Here are the results of the tournament:

Thanks to all the participants for coming and see you all next year for the 4th edition of our LIONS CUP! 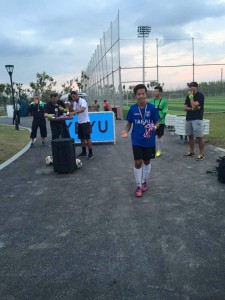 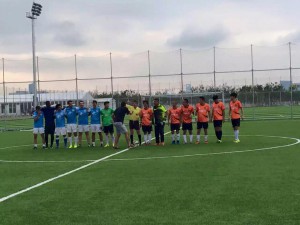 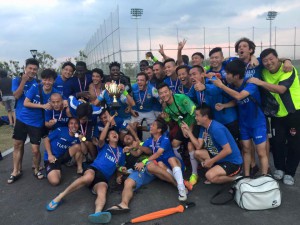 Please make sure to plan your weekends accordingly, cheers, 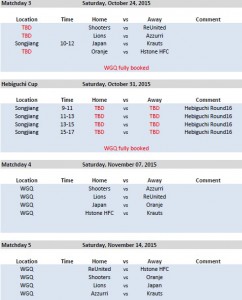 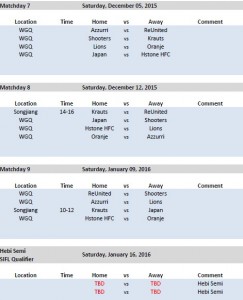 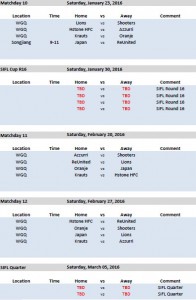 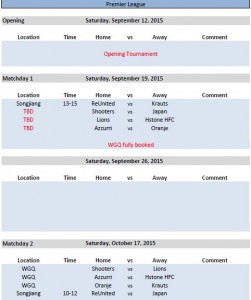