It was a memorable day last Saturday ! Mainly because of the extreme winter condition we had to play in. The temperature was not above zero but it was the strong wind which caused havoc as it felt like – 10 ! The key was to stay focused as the opponents were our old rivals the Shooters and we needed a result to keep the title race in our own hands.

It was great to see that despite the circumstances we had a team of supporters under the leadership of Big John cheering the players. We decided to play a compact squad but with 3 strikers upfront. The Shooters opted for Kevin as lone striker upfront which allowed us to build up the play from the back. The first big chance was not for us but for the Shooters as Kevin thought he certainly scored but our goalie Radouane saved it. On the other end, a slip up in the Shooters defence and a good combination play between Dani and Az put Dani in front of Chris Banners the Shooters goalie and nicely finished it to give us the 1-0 early lead. It was a good start and with the help of the wind in our backs we created a few other opportunities and started to win most battles in the midfield. After a good half time talk in the dressing room this time we knew that if we kept the focus on our defense we could win the game. Shooters pushed forward with long ball by order of Zippy in the box but Radouane seemed to be unbeatable on the day as well our veteran Legend Jeremy cleared one ball of the line with his head. On the other side the Lions played well on the counters and actually it was a great game to watch. With 7 minutes to go on the clock Dani decided the fate of the Shooters as he scored the 2-0 on a fast break. The Lions didn’t let go this lead and took all 3 points and with ReUnited losing against Japan 1-0, it put us back on top, with 1 point ahead but with 1 game in hand and only 6 games to go ! Our next game in the league will be right after CNY against ReUnited and we are looking forward to this game !

Sadly, after the game, we had to say goodbye to Yngven and Therese who are moving back to Norway and we thanked them for their outstanding games for the Lions and the Lions Legends teams. We hope they will come back one day and wish them well back home !

On Sunday, the games were cancelled which proved a good choice as the day temperatures were -6 degrees in Shanghai ! Let’s keep the momentum going and all comes down to the trainings. We are fully in the run for both SIFL and SPL titles ! Lets go for it Lions ! 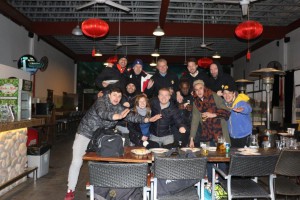 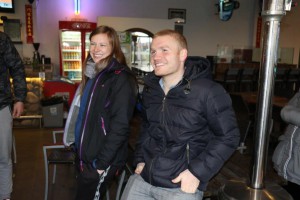 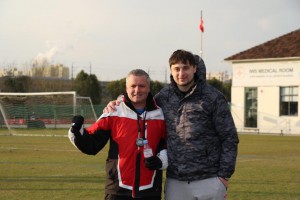 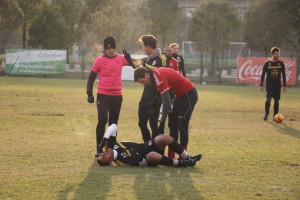 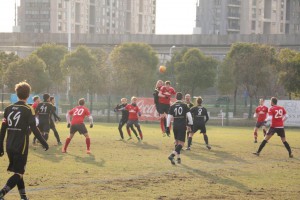 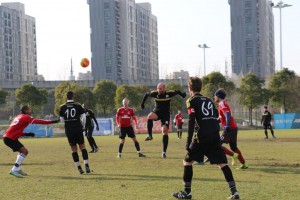 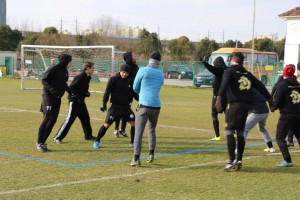 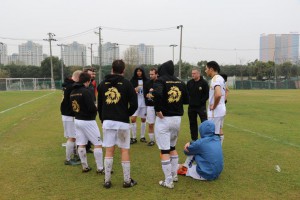 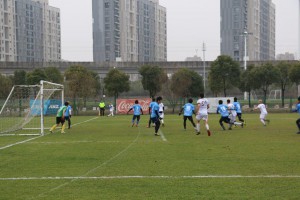 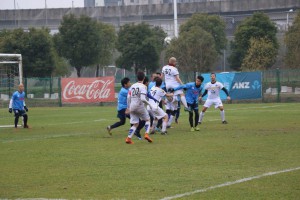 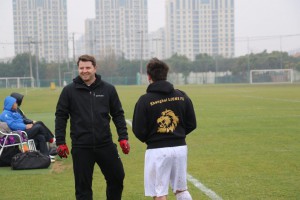 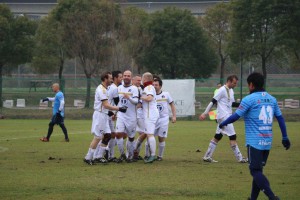 It was a cup game for us last Saturday with a thin squad and knowing that we had a big game next week against the Shooters. Key was to stay injury free and no cards. We missed several players today but started well controlling the game and taking the lead after great combinations in the midfield Allan opened the score 1-0. We added another one with again good combination football finished by our right back Aga. All looked good until Yngven thought chirstmas was not over yet and handed a belated gift to the Krauts. It was accepted and we went 2-1 up into half time. The second half was characterized by the missed opportunities by the Lions as they should have put the game to bed on several occasions ! However as it goes in football if you fail to score the opponent will do it for you. It was an unnecessary penalty that brought the Krauts back in the game with 5 minutes to go. Penalties would decide who would go through to the semis and after Azz missed the first I didn’t look good for us but with a stop of Radouane and goals from Laid, Fabie,Nicolas our left back with his right foot, and Aga we made it as Stas Krauts topscorer shot his penalty into orbit !

We will be up against Reunited in the semi final but first next week we have the BIG game versus the Shooters ! Obvious that we expect all of you at the training this Wednesday and be ready for Saturday ! 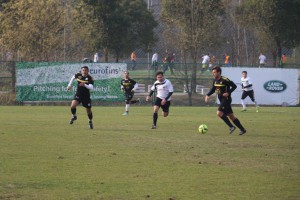 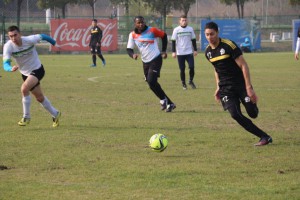 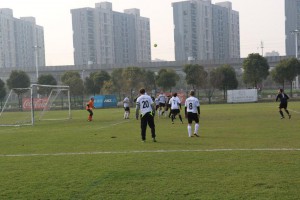 The January window is always an important time in the season. Usually we have some players missing and others might not be 100 pct match fit when they come back from the break. The team always looks a few kilos heavier as well. This time we had a solid squad with the help of some veteran players. Our opponent were the Azzurri’s and after 10 minutes of play it was obvious that they didn’t come to win but would like to settle for a draw. They rarely came over the middle line and the Lions found themselves running into a blue wall. Best chance was for Felix in the first half but he just couldn’t finish the job. Ten minutes before the end of the first half disaster struck for the Lions as an obvious innocent long ball of the Azzurri fell in between Fabie and Radoaune and both looked at each other without taking the ball. Instead Andrea took it and scored. We tried to stay calm but of course it played into the cards of the Azzurri who now could even sit more back than before. In the second half the Lions showed spirit and created a few good opportunities. It was a great cross from Azzeddine which found Felix at the back post and he gave us the well-deserved equalizer. At the end of the game we had three injured players and it was obvious not everybody was back at their usual fitness level. We did get two more opportunities to score by crosses in the box but our headers went just wide. Azzurri had just two shot on goal and most of the time were found in their own half but they got what they wanted, a draw !

Next Saturday we play the Krauts in the Cup and on Sunday we will play Japan in the SPL ! Obvious we want all Lions to come to the training this Wednesday and get our fitness back !