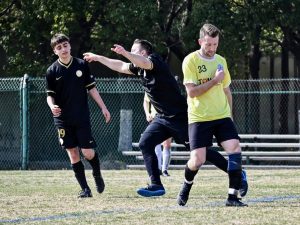 Last Saturday, we had a blue sky with 14 degrees temperature… No complaints about that while still in winter. For this game vs. Shanghai Kickers FC, we still had an exhaustive list of injured players… Therefore, we called up several youth players who made their debut in the first squad. Again without a goalie, we asked George to help out. Also, Ryan made his debut in the starting 11 as well as Julia. On their side, the Kickers were having an interesting squad with two solid center backs and a couple of fast players on the wings

We started well keeping most of the possession with good ball circulation however once we passed the midfield we rushed too much and were looking for a difficult cross or a long ball which were too hard for our forwards. The Kickers were playing on the counter and despite our possession and control of the game, they got the best chances. 0-0 at half time which was not too bad for us given our struggle in the first45 minutes.

In the 2nd half, We decide to go for the breakthrough in the first 15 minutes and we got our reward scoring after a nice build-up. However, after scoring first we started to get nervous… Probably a lack of control or experience which is also understandable given our super young squad. Luckily Dan (freshly coming out of the bench) scored the 2-0 for his last for the Lions. Unfortunately and once more this year, Shanghai Kickers FC came back on a corner which we failed to clear. In the final minutes, we scored the last goal for the 3-1 which lifted all doubts to secure the 3 points.

It was a good match and a good win. We will train one more time this week before a short break for the Chinese New Year.