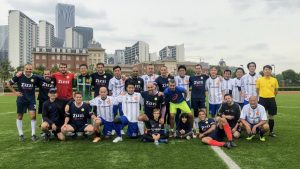 It was a bit of a cloudy day with Super 48 as the opponent. As the president was on kids’ duty, therefore his assistants were in charge. As always, the objective of the day was to end-up the game with a clean sheet.

We started the first quarter organized in 3-5-2… An unusual formation that resulted in some tactic adjustments from our players… Therefore, the rhythm was not very high but we got a penalty just before the break following a handball on the surface. A straight penalty converted by captain Bob for the 1-0.

In the 2nd quarter, we started with the same squad with a little 3-4-3 adjustments in the organization. This change didn’t prove to be effective with probably the worst quarter of the game for our legends… We were playing in “grapes”, forgot to play wide when we could and lost many balls. Luckily, our legends added one more in their basket with an own goal following a cross for the 2-0.

In the third quarter, we made a few changes in the squad with Mamdouh & FL coming in. We start playing simpler, faster and wider. Imad came trough the left midfield beating few players, passed the ball to Bob again for the 3:0. Another chance came from a cross on the right from Bob and Tomas was at the reception for the 4:0.

In the last quarter, Chris slightly injured had to come off and Adrian, a new player invited by Nikko, came back in and played well. We added two more goals… arguably the best two goals of the day. Imad sent a ball above the defender on the left and Bob was at the reception and manage to Lob the keeper from outside the box. The last one was a beautiful cross from Tomas on the right and Bob again with a volley send it right in the back of the net.

A great 6-0 victory with our clean sheet mission completed on the day.