After our win on Saturday it were our Lions Legends next to play their first game of 2015 ! It was a friendly against Japan who will be joining our veteran league this season ! With a few Veterans missing but with the help of three Lions U17 players they started a bit shaky as the Christmas and New Year break added a few kilos to the legends but it was a cold strike by Fred F which opened the score 1-0 ! In the second third it was Max who headed home the 2-0 and he disclosed to us that his last goal was back in 1836 ! Japan got one goal back on the break and in the last third the Lions failed to kill the game and Japan came close to equalize by hitting the post. Overall a great warmup for the season for the Legends who are still  unbeaten in 2015 !

Right after the Legends our SPL Lions were next up facing the mainly Spanish team called the Flamenkos. In the first half the game was very even with the lions having the best of opportunities. It stayed 0-0 in the first half which given the recent games result of the Lions was not bad but in this game many players stepped up and performed much better. Azzeddine came in in the second half and it proved to be very valuable as he scored two goals and should have got a penalty. After checking after the game with the referee why he didn’t give it  his comment was “ I will give you next time “ we didn’t know that in China you can have penalties credits ! It’s good to know ! It was a very positive 2-0 win well deserved and even more so because we fielded 4 Lions U17 players who got very valuable experience by playing with the men !

Next up will be Shanghai 2000 who ended our 35 games unbeaten run in the SPL so we know what to expect playing against them ! Let’s All (Lions Legends/Lions/Lions Youth) come to training this Wednesday !

Great end of a great weekend for the Lions with three teams winning their games ! 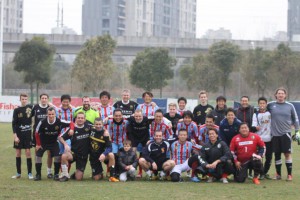 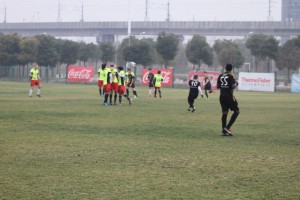 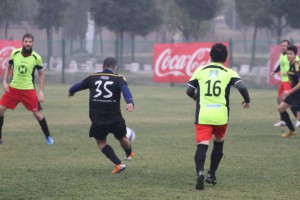 Please take a look at our fantastic agenda and keep all the dates free !

We had a busy Lions weekend ! First we had our SIFL game in the early morning of Saturday versus Reunited. They just had beaten the Shooters the week before so we knew it wouldn’t be an easy game. In the first 20 minutes we couldn’t deal with the fast pace of their African strikers and didn’t manage our defense well. Our plan was to score first but reunited scored first when we couldn’t clear a ball in the defense. Now we needed to response and that’s what we did on fast counter attack finished by Romain. In the second half we promised to put it right and indeed we created several opportunities and Reunited hardly came over middle line. But creating chances is not good enough if you don’t finish them ! So the game ended in a draw 1-1 which felt like loss ! ICS Channel Shanghai was filming the game and you might see a glimps of the Lions today at 2100 on Shanghai Live (at the expat session). Next game will be against DIB for the Cup and that’s the perfect stage to put our team back on track, obvious we need to step up our commitment now and show that we are hungry for the title !

On Sunday Morning the veterans kicked off their season’s opener versus the Irish ! It was a beautiful day and it was great that we managed to put a full squad out despite many players not being available. We got the help from two of our U17 players, Yuki and Ryo who played well. We took a 3-0 lead after two halves and played decent football. It was nice to have Big Michael back our good old goal scoring machine and he netted two goals and Fred F. was in fine form as well despite his bronchitis, scoring two goals as well. Final score 4-2 win and our next game will be march 30 !

The SPL Lions were playing at the great pitch in Century Park. Our opponent was Sport for Life the new team in the SPL this season. Our plan was to work on our goal difference and we started strong within 8 minutes we were up 2-0. However SFL came back thru a corner and they came very close to the equalizer from a free kick which at the last moment was saved by Max our goalie. We scored another goal to make it 3-1 but again we let them score from a corner but our spirit was good yesterday as we responded witin 20 seconds when Nicolas went on a run and crossed to Yosh who scored to make it 4-2 at half time ! The second half it was all Lions and indeed we started to work on our goal difference scoring another 5. Final score 9-2 and with the Marlins and Cowboys ending their game with a draw we are back in the drivers seat ! Go Lions !!!!!

Looking forward to next weekend already lets have a record number of Lions at the training this Wednesday ! 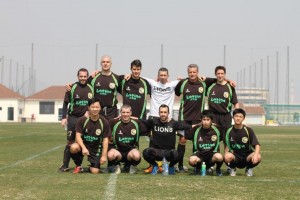 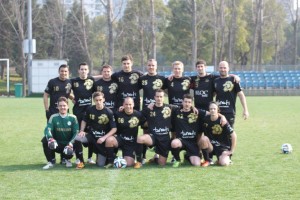 We had our last game on Saturday before the Chinese New Year and our opponent was DIB ! The semi professional side from Shanghai was trailing us by three points before this game after we had beaten them in the first game of the season 1-0. We wanted to get a result out of this game to keep the championship in our own hand. With no Azz and Simon we knew we had to step up our game and preparation in order to do so !

It started with the poker night on Friday at Charles home ground ! Great way for team building before a game and according to “Le Patron” all Lions were drinking water and nothing else. Next positive was that all the Lions arrived way early before the game and helped by the great weather their spirit was lifted soon.

Tactics were discussed and key to this game was to defend from the top to bottom and never give them space for a counter attack which could be deadly against DIB. In between I told Chris who had been troubled with injury most of last season that we needed him for 90 minutes today and I referred to the fact that our team spirit should give us the edge over DIB and last but not least I asked the senior players to step up and give the extra’s needed today to get a result.

In the first half we played very disciplined and everybody worked very hard to make sure we didn’t concede. Remy our Captain blocked two shot from the line just a confirmation how focused we were not to concede a goal. We got a few good breaks and came close to scoring a few times. DIB were on three yellows at half time which was another important aspect in such a close encounter.

Nil-Nil at half time was a good result and we continued to play the same tactics in the second half. All looked fine as  we controlled most of the possession but 20 minutes before the end disaster struck as the DIB striker in between three Lions suddenly turned and found himself free in front of the goal and didn’t miss ! For 5 minutes all players heads were down as we didn’t expect them to score while we had been defending so well throughout the game ! Benji not match fit for the game due to injury gave it all but for the final 15 minutes I asked whether Francois our veteran could play in Benji’s role, sure was his reply as his father was watching the game ! The Lions started to fight in the last 10 minutes and gave everything in their heart and soul to score a goal. First a corner and a great header by BIG John almost got us the goal, seconds later a super cross from Fabie found Romain who couldn’t convert it, another great cross from Chris found Romain who volleyed the ball straight and if it would have gone in it would have been goal of the year but the DIB keeper saved it ! Another corner in the last  minutes and all Lions went up even Dimitri our keeper went up.  In the very last minute another corner and Francois who remembered our pre-game talk that somebody needed to be on the DIB goalie so he did and when Chris  (he lasted 94 minutes) corner came flying in one meter away from the DIB goalie he  knew before his header that he would score !

Let’s stay focused and work hard over the Chinese New Year to stay fit and sharp for the second half of the season !

If you are in Shanghai during the Chinese New Year pls come the training as the Lions never stop playing ! Next up is DIB in the Cup game on the 15th ! 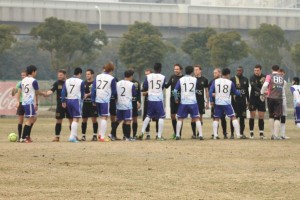 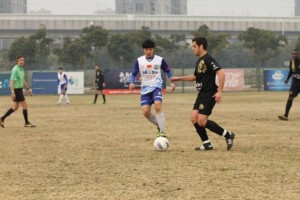 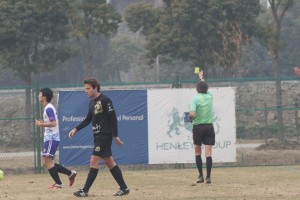 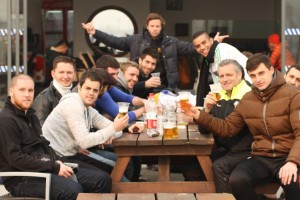 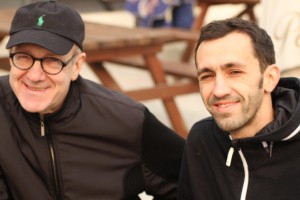 It always important for our club profile to establish a good name outside
China ! That’s what we did for the second time our Lions clinched the
Champions title of the International Phuket 7’s tournament. This year the
team had a good balance with a lot of experienced players. Felippe even flew
over from France to play and our old Lion goalie who lives in Thailand was
in fine form. No surprise that two Lions Veteran players scored the winning
goals in the final, Francois and Felipe, 2-0 win. Congratulations ! 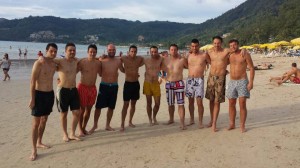 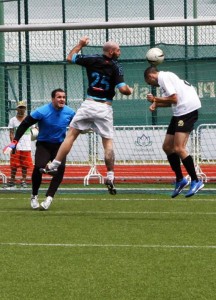 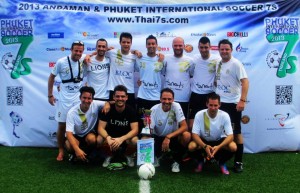 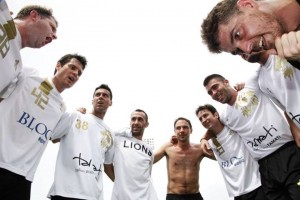 Lions, here are the players of the  2 teams that will go defend our Shanghai LIONS FC colors at the Xiamen Amoy 7aside Cup on June 11th 2013:

There will be 12 teams in total, mainly expats.

Here is a link I got from our old Lions friend Stephane Ehrhart.
You’ll be able to watch all game summaries, goals and soon full games in Replay.
On top, this is free!!!
Enjoy and thank you Stephane
http://www.youtube.com/qualifiers2014

Opposed to China in a friendly on Monday in Recife, Brazil atomized Chinese selection 8-0 with 6 goals in 2nd half. The striker Neymar has been the architect of this win, signing a hat-trick. Ramires, Lucas, Hulk, Liu Jianye (og) and Oscar are the other scorers.

It seems to be China biggest defeat in their football modern history.

All goals and video here

The Ghana Football Association has reached a cooperation deal with its Chinese counterpart to develop football in both countries.

The Ghanaian governing body will help China to develop its youth football.

In return the Asians, who are giants in women’s football, will assist Ghana in boosting its female game.

Coaches, referees and administrators will also be involved in the agreement as both countries will exchange their experiences to mutual benefit.

The deal was reached on Wednesday when the Chinese Football Association leaders met GFA officials, led by president Kwesi Nyantakyi, in Xi’an.

“A team of officials from the Chinese FA led by the vice-president Mr Lin and the GFA had a meeting today and we looked at various areas of cooperation,” Nyantakyi said.

“Apart from engagement between the two senior national teams, we agreed that we should look at some exchange of ideas in areas of women’s football and youth football.

“We agreed that we should help them in youth football and they will help us in women football.

“The Chinese have a good pedigree in women’s football and they have been world champions before and we have comparative advantage in youth football.

“Beyond that we will be looking at exchange programmes for coaches, referees and administrators for both countries.”

China held Ghana to a 1-1 draw in a friendly played in Xi’an on Wednesday.

Sacked by Al-Wasl last July 2012, Diego Maradona could continue his coaching career by choosing a new exotic destination. The Argentine former glory has indeed talked about China.
“I would like to train in China. I wish to contribute to the development of football youth in this country,” said El Pibe de Oro.
His name is cited for Chinese national team…