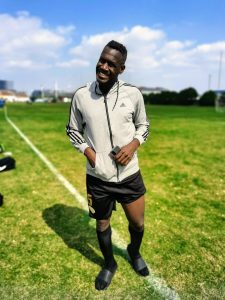 It was our second 09:00 am game and because of the early kick-off, we missed a few key players… For this senior team game, we were up against Cosmos who we played in a pre-season friendly earlier last summer.

They were well prepared and got us off guard in the early stages of the match… As a matter of fact, we were not sharp enough at the start and lost too many balls in the build-up. Luck was on their side when a soft free-kick was given on the left close to the middle line and their cross in was flying with the help of the wind past all the players and in the end past our goalie as well… It was a wake-up call for us and we got better at creating a bit more chances when 10 minutes before half time the referee pointed to the penalty spot after he saw a handball of one of the Cosmos players in the box. While Pat was already moving forward confident in our comeback; the referee went to his linesman who was surrounded by Cosmos players, and finally decided to change his decision to our big surprise! What a terrible mistake by this poor referee to overturn the penalty decision… Goal kick for Cosmos instead.

At half time we were talking about justice and make sure to get back into the game but within 15 minutes we didn’t react well to a great Juliano save and they scored the 2-0… For the Cosmos, it was game over! It’s true that we didn’t create a lot in the next 15 minutes but when got a free-kick at the edge of the box everything changed. Both Pat and Juliano were ready to take it but it was Pat who scored with a stunning free-kick in the top left corner. After this, the Lions were on fire and were looking for the equalizer. Masa-san came very close from the left but the goalie stopped his effort however it was Romain great placed ball in the left corner that gave us the well-deserved draw… Justice was made! and in the last minute, we almost clinched the win on a fast counter with a super volley of Masa-san but again the Cosmos goalie saved it.

Overall we were happy with the comeback and we will pay more attention to start stronger in our next game. Well done Lions!