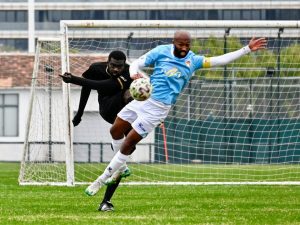 Last Saturday, our first team had a late kick-off against last year’s SIFL champion Azzurri. No need for extra motivation for this kind of big game and started the match well. Our objective was not to give away anything and try to find space on the wings. We opted to start with more experienced players and let our youngster come in at a later stage in the match.

On a side note, the referee was annoying and disturbed the match blowing his whistle every 5 seconds… It’s hard to play football in this kind of condition. He had one bizarre call for an unintentional back pass from Pat to our goalkeeper Marcel within the box… Luckily their free-kick shot went wide. On our side, we got a free-kick on the edge of the box but Pat’s effort was saved by Azzurri’s keeper.

It was a slip up in concentration and communication that changed the game. On a cross from the side, 2 players were looking at each other asking who would clear the ball. Azzuri punished that second of hesitation and took a 1-0 lead. We brought Jason to get some speed forward but he was very unlucky twisting his shoulder after only 5mn… Game over for him. We didn’t have many upfront options left with Kyle and Jason both were injured. We tried to get into halftime 1-0 down but with 2mn to go, we gifted them another early Xmas gift… Instead of clearing the ball away quickly enough, Azzurri’s striker got a favorable counter block into our central defender’s feet… One on one versus Marcel and 2-0 lead for Azzurri.

In the second half we didn’t give up and kept trying but hardly came into the box of the Azzurri. We lost FL with an injury and put Dan up in the last 15 minutes but nothing changed for us. The Azzurri scored in the last 5 minutes a goal that smelled offside. Unfortunately, we didn’t protest enough to make the lineman raise his flag… This is called experience!

The difference between us and the Azzurri was the experience. Azzurri team has a squad of fully experienced players whereas we are working with youngsters. It’s all about learning and training hard to improve yourself and to improve the play as a team. Next time we will do better Lions! This coming Saturday, we will play the Pures. This is another Japanese team and only a win will do for us.