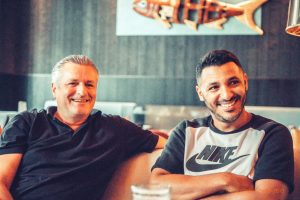 Lions, friends & family. It’s time to say goodbye to 2019 and welcome this happy new year 2020! 2019 was a good year for the Lions as we left some footprints everywhere in Shanghai!

The Lions FC is and will always be a club where we rely on the help of our own players to run and manage the club. That’s the beauty of our club and we were very sad when we got to know that Azzeddine made the decision to move to Phuket. Azzeddine’s contribution to the club is hard to express in words but his passion for the sport and the understanding of the game is from a level we can only look up to and we appreciate so much as he showed us the way how to train how to play and how to win!

In the last two years, he has put all his love and energy in the youth teams and all teams improved! Of course, we always hope he will come back one day but for now, we do wish him all the best in the world for his new life in Phuket.

Going forward we are very pleased with Patrick taking over Azzeddine’s role at the youth and senior training. With the great physical sessions of Nick, we have a great team of coaches. Also, it’s nice to see Romain helping out with the senior team and new Lions U18 players making their debut with the senior teams and playing very well! Last but not least I like to thank FL who’s working on the background to keep our website and statistics alive and running! Life nowadays is all about content…. and with 3.5M clicks on our website, we must do something right!

We wish all the Lions and their families in Shanghai or abroad a very healthy, sportive & happy new year 2020! Let’s leave a couple of more footprints in Shanghai this new year! Trust me we are very lucky and fortunate to have this great group of people and players from all over the world keeping the name and reputation of the Shanghai Lions alive and kicking! Once you are back home to your country only then you realize how special it was to play in Shanghai with the Lions whether you are U16 or U18 or Senior or a Legend!

LET’S ALL ENJOY TO BE PART OF THE LIONS FAMILY AND MAKE 2020 ANOTHER GREAT SHANGHAI LIONS YEAR !!

CHEERS & HAPPY NEW YEAR 2020 AGAIN
Freek on behalf of all the Lions in the WORLD!