It was great weather ! However we were running low on numbers as we got some last minute cancelations and the Lions played in the SPL the same time. So we were 12 only but all were on time and Jeremy even came out straight from Paris to the pitch ! Yes we even did a warming up and it seemed to do magic to our team. In the first twenty minutes we were up 3-0 goals from Fred 2x and Michael. After that Japanese team started to play better and the game was more even. We stayed focus in defense not willing to give away a goal. Fred made it 4-0 and it was good to see him back at his best. A few minutes later Gwenn’s cross was kicked into their own goal by a Strosso player to make it 5-0. In the last minutes of the game people tried hard to let the President score but he was unlucky in the finishing… hitting the cross bar and some birds ! At the end out of sympathy with Strosso Bob passed the ball back to a Japanese player to put him one on one with our goalie Thierry but he saved it to keep our sheet clean !! It was a good performance from the legends we will have our last game of the first part of the season on June 14th versus Emerald at 1100 ! 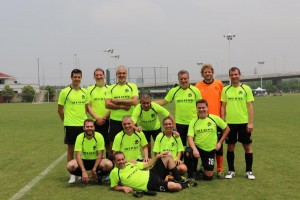 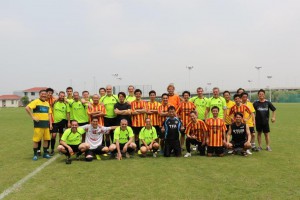