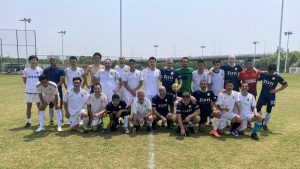 After the Legends dropped out of the Championship race last week against Emerald we were having a small squad against Wellington as 5 legends were sidelined due to injuries! The weather was super hot and we were also lacking a bit of motivation… The idea was to play simple football with a lot of possession so that the opponent would be tired out chasing for the ball.

In the first 20 minutes, we played bad as we couldn’t hold two passes in a row as well were caught several times offside. Wellington for the occasion had more local players than their regular players and we lacked speed against the locals. No surprise the way we played that Wellington took the lead.

In the second 20 minutes, we started a bit better and got several corners and a close-range free-kick but Pat saw his effort being stopped by the keeper. After this Pat came off with a back injury and made the injured players list to 6 players!

In the third 20 minutes, we finally started to play and scored a great goal after a good build-up and passes it was an easy tip-in for Tomas. The next goal for Wellington was weird as there was a clear offside and both teams stopped playing… The referee who had the whistle in his mouth finally decided not to blow and the Wellington forward had a free pass to score by himself with nobody defending on him. We responded with two quick goals from Kev and Haroun and took the lead.

In the last 20 minutes, we had a couple of changes but either the delivery or the finish was not good enough. Wellington snatched the equalizer on a break to make the final score 3-3!

We hope that some of the injured players can recover soon as we face a very fit and fast Japanese side next Sunday!