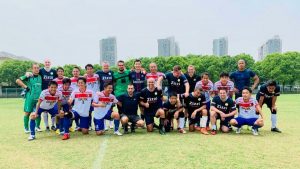 We knew it was going to be an uphill task to get a positive result out of our last match of the season against Japan. Our injured players’ list was super long with 7 injured players… On top we still have players like Laid, Fabi & Terao-san stuck outside China. Still, we managed to get a team of 14 players but it was light compared to the 30+ players squad from Japan side!!!

The game plan was to slow down the pace and patiently wait for our chances especially from corners of free kicks. It worked well until Chris, barely 15 minutes in the match, pulled his hamstring… On top, his opponent managed to cross the ball in from the left-wing, and Japan scored for the 1-0.

In the second 20 minutes, we played our best game controlling the match and we came close on a few occasion and Japan had barely a shot on goal.

In the third 20 minutes, the game was over when the Japanese winger on the right made an incredible volley that sailed over our goalkeeper Clement in the far corner. Soon Japan scored the 3-0 after an unlucky touch of Clement and the game was over.

In the last 20 minutes, there was not much we could do to change the score and with this result, Japan is on their way to gain their first-ever SPL Veteran title this. We will have to settle for third place but will be back stronger next season.

As it was Fred’s last official league match, all players stayed back to have a few ice-cold beers and our appreciation for Fred’s commitment and dedication to the team was given. We wish him a good future in France!

We will play the SPL V end of the season Tournament on Jun 14th, 2020. Hopefully, some of the injured players will be back by then.