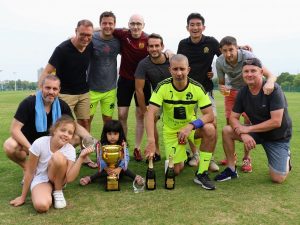 For our Lions legends, it was the last performance of the season in SPL Veteran league with the end of the season 7 aside tournament followed by the award ceremony. We had a great squad and motivation was high to try and win the tournament. Our strategy was laid out by the coach and we all agreed clean sheets first as matches were just 12 minutes each so to concede first it would be the end of the glory ! 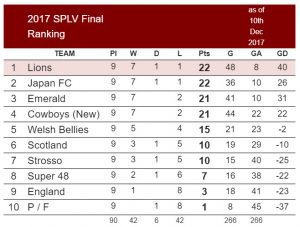 So our Legends won the SPL V league this season as you can see from the standing it was very very hard this year ! It was a great performance which came down to the last match against Japan which they needed to win and the Lions had enough to draw it was 1-1 in the end ! ! Amazing team performance ! So we picked up the Cup but also two more awards. Top scorer of the SPL V was Bob with 17 goals ! As well best goalie award which of course will be for both Pascal and Clement !

Every year will be harder and harder to win this Championship as the level of the Veteran League is getting better and better ! So we will try to keep the title next season ! See you all at the training during the summer at Century Park !