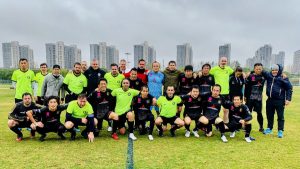 Last Sunday the legends were up against Japan FC, in tittle champion of the last 2019/2020 SPL Veteran edition. For that game, we came with a pretty in-depth squad with 16 players… We knew it was the minimum as the Japanese always bring the double with around 30 players each time. Although we had the right number of players, we knew the game will still be difficult in 2 aspects. First, Japan FC didn’t lose in over 1.5 years in SPL V. Second, some key play-makers were lacking on our side. Still, we came with the hope legends ship will remain afloat while making some damages.

In the 1st quarter, the objective was to remain compact and defensive in order not to expose ourselves too much to our opponent’s very classic counter-attack style of play. Although we were not very dangerous, it worked for a while… Unfortunately, with 2 dragsters on the flank on their side, we start playing too low in defense which gave wide space and time to Japanese midfielders. On one of them, their midfield got a ball with plenty of time and adjusted a nice pass at the offside limit for their striker… 1-0 for Japan FC.

Same topo in the 2nd quarter as we conceded the exact same goal on a lost ball… hard to swallow although we got a few more chances to score than in the 1st quarter.

In the 3rd quarter, it became more difficult for the legends as we were up against the wind. We also start to feel the difference in fitness and squad depth between the 2 teams… Despite our efforts, our Japanese opponents were not losing many balls and were also combining well. As a result of these combinations, they were often outnumbering us on the flank and multiplying the cross into our box. On one of them, they scored the 3-0.

No goals in the 4th quarter. We felt better and combined a little higher on the pitch. In defensive time, our pressing was also higher and more efficient. To temper this better feeling, it was Japan FC’s second team that was playing back on the pitch as the score was settled in their favor already 🙁 In the end, despite the energy given in the fight; it’s our Lions’ legend ship that went down without much to say about it…

If there’s a lesson to this game, I guess it shall come from Yamada, the Japanese president… In substance, he said that the “Japanese team is training recurrently with a significant percentage of their veteran attending training sessions”. Therefore, they have (1) the depth, (2) the condition, and (3) automatisms/combinations practicing together often beside an obvious talent for some of them.

Legends, if we have ambitions it is a time for more or us coming back to the training more often. Otherwise, it may become a habit for the legends ship to go down against teams such as Japan FC and/or Emeralds in the future.