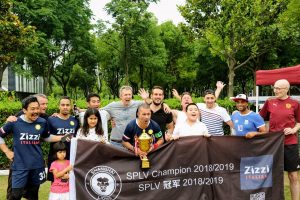 Despite the hot weather (32 degrees),  we had a great setting on the grass field of Jinqiao with 17 teams participating in the SPL & SPL V end season tournament ! After a busy month of May with 4 consecutive games in a row, it was finally time to relax. With a small squad, our target was still to win this 7 aside end season tournament. Alex helped out as keeper and Max made his comeback after his ruptured his achilles last year.

First match was a good warming up with a win but we blew it in the second match as England scored on its only and single opportunity… While we pushed forward for the equilazer, the ball didn’t want to get in and we lost 0-1. Despite we won 2-1 the last game of the group stage, England ended top of the group and later won the tournament !

All was fine as the ice cold beer tasted extremely well after the matches and we were ready for the price ceremony ! The last cup of the day was for our legends with the SPL V championship cup ! We took a lot of nice pictures with our families/friends and ended up at Pistolera for more drinks & margaritas ! Great way to end a Great Season !