What a day it was last Saturday ! We were up against Reunited in our last game of the season. A win or a draw would be enough for the title a loss would take it away from us. We had an early morning meeting at 900 AM as we opted for a bus ride to the Songjang Stadium. In the morning it was already 26 degrees and when we entered the stadium the temperature was well above 30 degrees with no shade around the pitch we knew it was going to be a hard day……..

We had planned a clear strategy as we wanted to dominate the midfield so we played with 5 midfielders and good old Charlie upfront. From the whistle we took control of the game and it was obvious that the heat took some speed out of the game which was not a bad thing for the Lions as Reunited are known for their fast strikers. Our passing game worked well and we came close after a free kick from Azzeddine but the ball went just over the bar. Reunited couldn’t build up as they liked and opted for long balls which were easy targets for our rock solid defense. It was a fast combination on the right which put Charles in a scoring position and he didn’t let us down and scored with a low strike. We didn’t know how important the goal proved to be but…….! Soon after Romain came one on one with the keeper but his lob was not strong enough. It was 1-0 at half time and for once we had kind of dressing room as we found a small cave. The half time talk was clear we were 45 minutes away from the title and it was up to us to take ! We all agreed but two minutes in the second half disaster struck as Dave reacted when a Reunited played grabbed him by his neck. It was red and not a pleasant feeling to play the rest of the game with 10 Lions in the sizzling heat ! What evolved was a heroic display of fighting spirit of each single Lion on the pitch. An incredible performance with Azzeddine alone upfront still managing to create havoc. We came close a few occasions but were desperate to make it to the finish line ! Reunited had the last chance of the game but they shot wide. Credit to Reunited who kept chasing us in the title race until this last game.

The final whistle and what a great feeling it was ! Just a few minutes to celebrate all the hard work we did this season on the pitch. The bus ride back was very pleasant and we had a great brunch at our sponsor La Creperie. After that the Lions disappeared into the night life of Shanghai.

We are now 36 games unbeaten (two seasons !) and over 3 season we only lost one game against DIB those are unbelievable records and we can say that we are leaving our foot print in Shanghai !

After the game we all  agreed that we are not done yet as we want to go for the treble. We will get it if we beat the Shooters this coming Saturday in the SIFL Cup final lets come and support the Lions in their final game of this great season ! 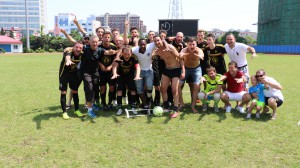 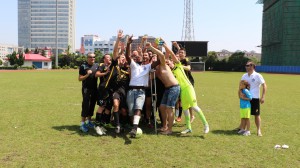 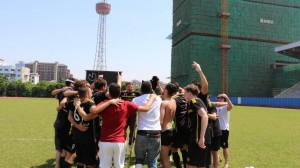 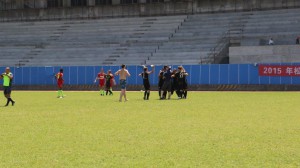 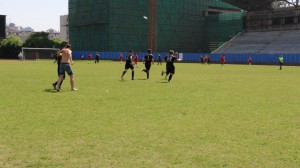