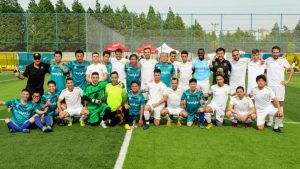 For this 1st round of Chen Yi Cup 2019 versus Gelingda (阁凌达), we had with a good mix of young and experienced players. For the 1st time in Chen Yi cup history, the Shanghai Football Association (SFA) allowed 2 foreign teams participating in the cup with Shanghai Japan FC and ourselves. 10 minutes before the match, the organizer told us that our opponent was certainly the weakest among the 32 registered teams. Icing on the cake, they were only 9 players to start the game with few of their guys stucked into traffic…

Actually, the game got broadcasted live on the internet. You can watch the replay in full on Youtube or on the following link.

During the line-up, we had the “official” privilege listening to the Chinese national anthem. A not so common football experience here in China. Coming back to our opponent, we proved Gelingda bringing a small squad was a mistake by scoring 2 goals on our first 2 attacks. We kept playing well and got rewarded with more goals. For instance, our right back Fabi certainly scored the nicest goal with a long range shot over the keeper. Just before half-time, we got another surprise with the organizer asking us to slow down the scoring machine… Understanable with 10-0 at half-time.

In 2nd half, we got a little experimental in our line-up. 5 straight changes were made with Chris as offensive midfield. While his son was wathing him from the sideline, he got the “father praising privilege” scoring a nice goal. Well done, Chris ! In the end, the score ended-up at 15-0. We shook hands and took a nice team picture together. Both teams will remember this match for different reasons 😉

We will play play the 2nd round on Sunday 26th of May 2019 at 09:00 am at T98 Lvzhou Soccer Base. Let’s keep our focus as the next team would probably be better than Gelingda.