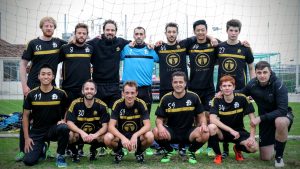 We knew it was going to be a difficult afternoon with 7 regular Lions missing including our goalie. Facing the Krauts with a combination of German winning mentality and fast counters with foreign players like Stas, we opted to secure our defense first before thinking of attacking. We started well in the first 10 minutes with Big John making his first start after 2 years of injury misery. After 10 mn of a balance, the Krauts took control of the game as we couldn’t hold the ball upfront resulting in fast counters to slice open our defense… Our goalie, Francois, stood firm in the goal but we felt the heat on a few occasions. However, the best chance of the 1st half came from Allan with a one on one vs. Krauts’ goalie but his effort just went wide of the left post.

At half time the speech focused on the fact that with a depleted squad we were still in the game with only 1 goal away from victory. So with the help of two young ex-students from Fabi Louis (19) and Pierre (18) (who came over for a holiday) + our new Chinese signing Xu Lin (23), we took the game back in our hands. Suddenly the Lions were all over the place and the Krauts were pushed back. Our combinations improving, we got closer chances with Allan again, Rosie, Xu Lin & Dave… In the final moments, a great ball through from Xu Lin putted Rosie in front of the keeper and he didn’t hesitate to lob the ball in the net ! A well-deserved goal seeing our 2nd half performance & it finally sealed the deal !

A great Lions team effort & a true Lions fighting spirit ! The Beer tasted good afterwards and we are now looking forward to the next game !