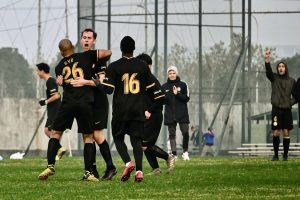 It was our last match of the year 2020. A difficult year for everyone due to Covid 19. We wanted the win badly, especially because we wanted to enjoy our yearly Christmas party scheduled later that same night. For this game, our seniors were against Pure FC although the weather was not ideal with a pollution level over 250 PMI 🙁

In the first half, we tried to get control of the match but were too slow and lost many battles against the solid Japanese defenders of Pures. The strategy was to focus on corners and free-kicks in order to score. Although we got plenty of them, we failed to convert any of them. We did take the lead but saw our goal overruled by the linesman who had seen the ball cross the last line and gave a goal kick instead. We were lucky when suddenly Patrick found himself in an awkward position when he was the last man and super fast Japanese striker went on the run to our goalie. Patrick fell over him and was lucky not to be sent-off.

It was 0-0 after 45mn. The talk during half-time was not so nice pointing out the lack of will to win and to score. There was no way we could go to the Christmas dinner without the win and in the second half, we played much better. Especially Hao Nan on the wings was a constant threat and he had a great strike hitting the crossbar. Finally, our reward came when Tiger was set up thru the middle and he kept his calm to make it 1-0 for us. Our confidence got better and we started to play well. However, when we were about to score the second one we lost the ball upfront and the Japanese made a trademark counter. We didn’t react fast enough and they equalized with a great strike from outside the box hitting the left post in.

It was now or never for us and a superb strike from George gave us back the lead. Now, we knew we would not give it away anymore. Instead, Samba scored our third goal and Philipp almost made it four. The final whistle marked the end of the year 2020 with a 3-1 victory for the Lions.

The bus ride back to the Shanghai Town and Country Club was a pleasure with plenty of beers and good music. It was the start of a great evening out. We will have a short break now and we will be back on January 5th for our training. Our first match will be on January 9th, 2021.