We had a very good Christmas Dinner last Friday. Very relaxing atmosphere at our Lions Lounge at Bloc. It was a good time to review our year and the progress we have made as a club. Terao-san had the time of his life as he was invited to kiss 10 ladies and Kevin made sure he will get a new tie!

After the dinner most of the players went for one or two more stops knowing that they had a game the next day and needed to be fueled for that.

We had no idea why we  had to play the SIFL Cup Qualifying game. Being the winners of the Cup last season it was quite ridicule that we had to qualify for this year’s Cup. I give credit to the Lions who came to play versus the German Krauts and never missed motivation to win. The environment was not inspiring at all, no people at Waigaoxiao cold and windy and what to play for ??

High-light of the first half was a good fast short corner and the shortest man on the pitch flying in the air and scoring the header, leave it up to you to guess who was this flying machine… 2-0 first half and the Germans didn’t do much it was time for everybody to put their name on the game sheet including Fabi with a screamer ! 8-0 we stopped enough goals what on earth were we playing for in the first place ! 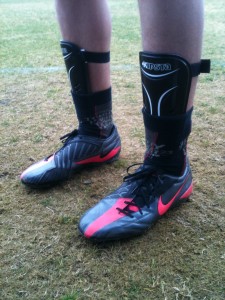 Yesterday we had 15 hard core lions showing up at the SPL 2012 Santa Cup.

Was a bit disappointed some Lions decide to stay in bed instead of having fun with their team mates for the last tournament of the year. However our U18 Lions did well for the first time to play on the big stage, they scored a few goals got some win and of course lost some games. Thomas our goalie was outstanding as he had several incredible saves on the day. Simon who played 16 games on the day scored his first and second goal for the Lions on a Sunday. Hope this will be the start of many more goals for him ! It was great to see Benji showing up with a big smile on his face yes it was 1300 Pm but at least he came and scored a few goals ! The Santa Cup was not about ranking but the fact that the Lions together with the Scottish team closed Waigaoqiao give you an idea about the atmosphere ! Great way to end a great year for the Lions !