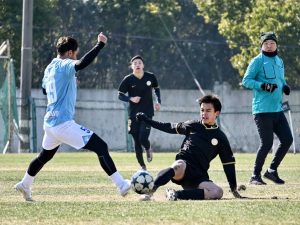 Last Saturday, our first team was up against Shanghai Azzurri for the first-round of the Hebiguchi Cup. While it’s was super-cold, we also struggled to get enough players for this match. On the goalkeeper side, we had both Juliano and Marcel forfeit for the game. Luckily, Ousmane was willing to be our goalie but obviously, we missed him a lot as our number 6 in front of the defense.

Despite our line-up being very young, we started well closing down the Azzurri team. Upfront, our forwards Moussa and Daniel worked hard trying to keep the ball in our possession. For 30 minutes the game was even and we hoped could go into halftime with a 0-0 score-line. Unfortunately, we gave away a free-kick on the edge of the box which Azzurri converted on a second ball. Five minutes later, we shot in our own foot again by giving them a penalty which they scored. For a while, we lost the match and heads were down. Against a top-team, you get punished for every mistake you make… This is the lesson.

After half time, we were looking for a goal to bring us back into the game. We thought we got it when Moussa got brought down at the edge Azzurri box… It clearly looked like a penalty but the referee only gave a free-kick which we didn’t convert. With only 13 players against 18 very fit Azzurri players, the final part of the match became hard for the Lions. In the end, we lost 3-0 exiting us from this year’s Hebiguchi Cup. Despite the defeat, we were overall happy with the team’s fighting spirit and positive attitude.

Next up we will play against Juventus and expect more players to be available. Let’s work hard at the training on Tuesday and go for a win next Saturday.