We are rpoud to announce that our LIONS Veteran team managed to win the Master Tournament last Sunday at WGQ.

It is the 3rd time they win this competition, that lasted 2 days and the cmpetition was fierce.

It was scorching hot and under the coaching of Jamie McCarry we won in final against the mighty SHOOTERS 2-1.

They were the first to enter the score sheet afer 10mn, but after soon after half-time, after a clever move by Jamie to switch Charles from center back to striker, we quickly equalized with Charles serving Thomas Cabreras, our recent spanish pilot recruit….

The wining goal also came from a pass from Charles directly to Kelly, later voted MVP of the tournament, who made a brilliant finish, outrunning the shooters defense and putting the ball passed the shooter keeper right in the right corner…

It was q quality game, as well as most of the games played in the tournament. The squad was really great, a big mix of may different nationalities and talents. Every played their own role to the success, it was truly a great experience for everyone and it was just a lof of Fun.

Too bad Presisent Freek couldn’t make it this year, as he had to attend a wedding in Holland, but Captain Fred was motivating the troups as walways, alongside Jamie who did a tremendous job as a coach, helped by old Lions Patric who came all the way from HK just to make sure we beat the Shooters in Final!!!!! 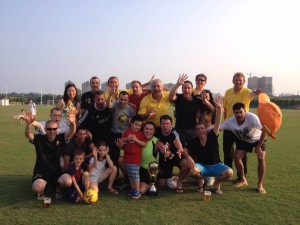 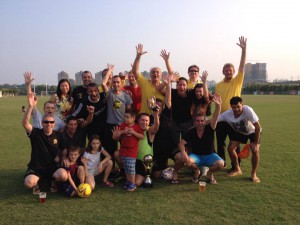