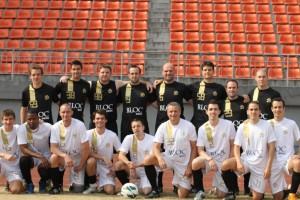 With two strong and motivated lions team we took the Speed train to Hangzhou !

Weather was good and the pitch fine. Both teams in different groups but the fact that Charles scored 8 goals in two games can give you a hint about the level.

Anyway we went over to have fun and with all our games won by both teams it was time for party !

After a good meal and having watched Man United beat Arsenal we hit the Club scene. Last man standing was Jonny o Shea as he noted that there were only 5 people left when he left G plus.

Next day we needed to see the damage of the night before but it was not too bad with only Matt, Chris and Jonny of course missing !

The semi finals our both teams beat two different Japanese teams to make it to the final.

As a Lions versus Lions final would not be fun we decided to enjoy the day with a penalty shoot out and some hit the “Butt” games !

We got the Cup and added another Trophy to our collection !