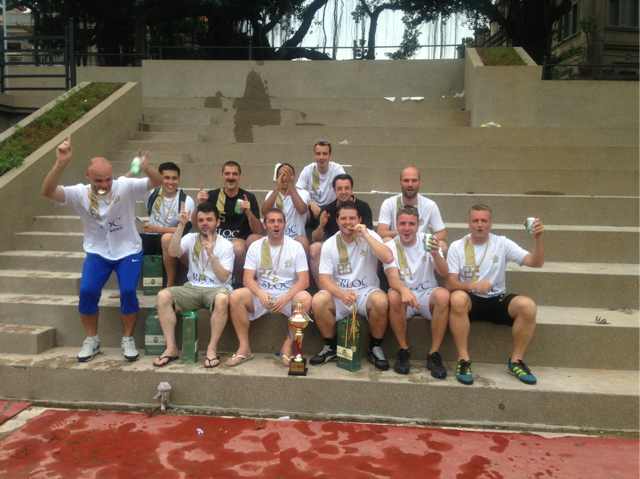 Sometimes it’s good to step out of your comfort zone and try a tournament or match outside Shanghai ! That’s just what we did we managed to get 14 Lions willing to take on the challenge in Xiamen ! Both teams were in separate groups of 6 and needed to end 4th or higher to make to the quarter final. That was 5 games for each in the humid and hot weather of Xiamen. The pitch was in a beautiful location on an tourist island and real grass / the size of the pitch was small which in the end was good and resulted in many many Lions goals ! Lions B, the older and experienced lions helped by two experienced Xiamen players (old..) , were having a tough group but still managed to end 3rd in the group ! Lions A, the fast and furious helped by Lions Legend Kely, in the easy group won all their games and ended 1st in their group. The quarter final started after a heavy rain break and the opponent of Lions B appeared to be too fast and too strong, Xiamen African Star ! Lions A cruised into the semi’s after crushing a Latino Team with more than 10 goals ! However they were up against the same African team as Lions B, within 5 minutes we were 1-0 down and the Africans started to party, however it takes much more to beat a Lions team. Within three minutes we leveled with a skillful strike of Kely and before the Africans knew it they were losing good play by Azz and good finish by Charles. In the second half we locked the game with a 3-1 score and win ! The final was against a Chinese local team and the field was packed with tourists watching our game ! After 7 games of football the legs were tired and the pace was slow however we scored by Gui on a very fast break. In the second half we found more space and a perfect cross of Kely was nicely headed home in the top corner by Gui. We knew we wouldn’t give this away anymore but we let the Chinese score with a bicycle kick in the last minute to make everybody happy ! 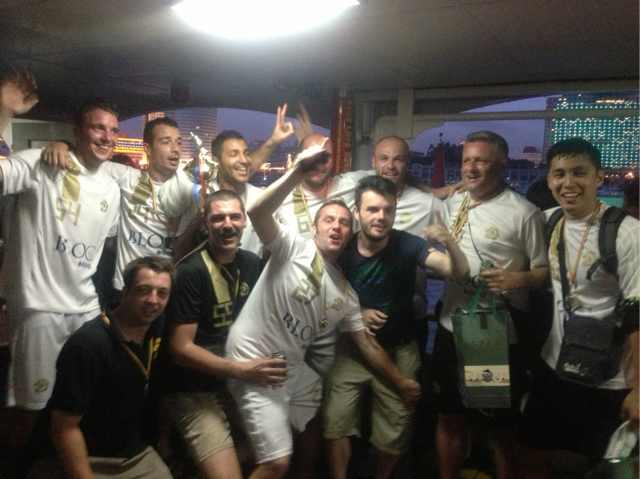 Time to party we were the first outsider to win this tournament ! It was a well deserved and a great team effort, including family and friends who came out to support us ! This was a very well organized tournament with a good level of football.  Victor, our Lions A goalie was voted goalie of tournament and Gui our top scorer with 18 goals in 8 games was miraculously denied to the top scorer trophy  ! However we won the Cup and showed the people in Xiamen who are the Lions ! We received many compliments afterwards about our display of football as well our fair play !

Lets win one more Cup on Saturday (SIFL Cup Final) and then celebrate this great season all together at Bloc !

Cheers Happy Freek (who scored a penalty with his head !)