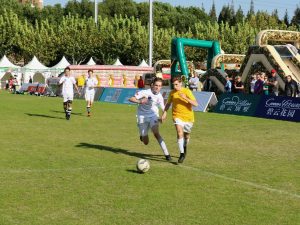 Matty Ward is an exceptional youth player who played both in the youth & the senior Lions’ teams. During these last 2 years, he won multiple awards such as Top Scorer & Best SPL Young Player. He stood-out with his determination to improve himself whenever he was on the field either at the training or at the matches. We wish him success in England and hopefully, he can bring his football career to the next level!

I have known Matty for 4 years now and he has been a real pleasure to coach. He gained a lot in his mental and physical development and I know he still has more to give. Thank you and I wish you all the best in the future !
Nick

The first time I met Matty it was when our friend Christian decided to promote him to the senior team of Century Park. A little boy that had a good touch with the ball. After being his coach for more than 2 years I had the pleasure to see him grow quickly. I hope I have helped him in some ways. And the best part for me was to actually play with him in the games and watch him do what he does the best. Please don’t forget us Matty and remember you are always welcome here!
Azzeddine

Best wishes to you Matty
Freek on behalf of all the Lions family!