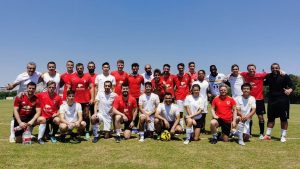 It was our 2nd friendly match to prepare our return into the Shanghai International Football League (SIFL) after a few seasons break! While the weather was slightly better than a few weeks ago, we had a thin and very young squad against the Voodoo team. For that game, our opponent was much larger and mature in-depth… To be mentioned as well that the Voodoo team has become one of the top tier SIFL contenders since our last game back in 2017.

Within the first 5 minutes, we created two great goal scoring opportunities. Unfortunately, we missed the chances… as it goes in football if you don’t score the opponent will and that’s what Voodoo did when we conceded a clear penalty tripping one of their player for their 1st occasion. At the first break (3 x 30mn), the talk was not pretty as we were playing too soft against this strong and physical kind of opponent.

In the second 30 minutes, we played much better at taking possession, making 3-4 passes combinations in a row which resulted in a few scoring opportunities… Of course, they were dangerous on the counters and our keeper Juliano kept us in the game.

In the last 30 minutes, we knew it will be hard for us as we only had 1.5 valid sub standing but we didn’t give up the fight… On a great counter, Dan our striker who knew that the Voodoo team goalie was out of his goal most of the match took his chance and scored a perfect equalizer.

To be fair, we would have probably deserved to lose this game as Voodoo pushed hard in the last few minutes hitting the post twice… Anyway, it stayed 1-1 before the penalty session that was decided before the game. we scored them all with Philipp, Freek, Julia, Tyron & Juliano while Juliano stopped one of theirs.

We were happy afterward as we got a lot of positives from this game especially with so many youngsters into the team and many seniors missing…  Let’s train hard and get more commitment to this new season.