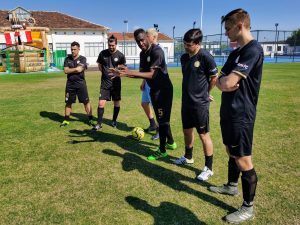 It was a beautiful day and the pitch was perfect as well. All set to have a great game of football. We had a good mix of older and younger players for this SIFL league game. Unfortunately, Juliano, our goalie, was not available due to work commitments. For this game, we were up against Reunited U18 who is a strong team with talented players with a lot of speed and power.  Of course, we had a plan and a strategy but all went upside down when we conceded a goal in the 1st few minutes… 5 minutes later we lost George our regular left-back out with a hamstring injury. 20 minutes later, it got worse when Masa-san found himself in a one on one with the Reunited forward… Usually, Masa-san would win those by using his speed but this time he got overrun and found ourselves down two goals. This was a problem for us as we now had to push more forward and were more exposed to their speedy attackers at the back. We showed character and tried to get back in the game and we had two very good occasions to score… one was a superb build from the back and midfield with the final station at Romain who hit the ball well and saw his effort hit the post. The second one was by a fast counter from our side this time Romain one on one in the box only had to give the ball to Kyle on the left so he could score but he made a move right and the chance was gone. They scored 3-0 but right before half time, Tyron scored a great goal with a strike from distance.

Yes, the heads were down at the half time but we took the opportunity to get them back up as if we would score one more we could unnerve them and come back like last week against Cosmos. Unfortunately within 5 minutes in the second half, we gifted them another goal again by losing the ball in midfield and let them run free at Fillipo. Actually, that was the final blow for us… Yes, we did score another goal after a great cross from Masa-san well finished by Tomas to make it 2-4. However, the uphill battle was too much in the last 20 minutes with three players in the back and they scored another 2. Final score 2-6 against the Lions.

Next up will be training on Tuesday and Krauts next Saturday at 13:00 kick-off.