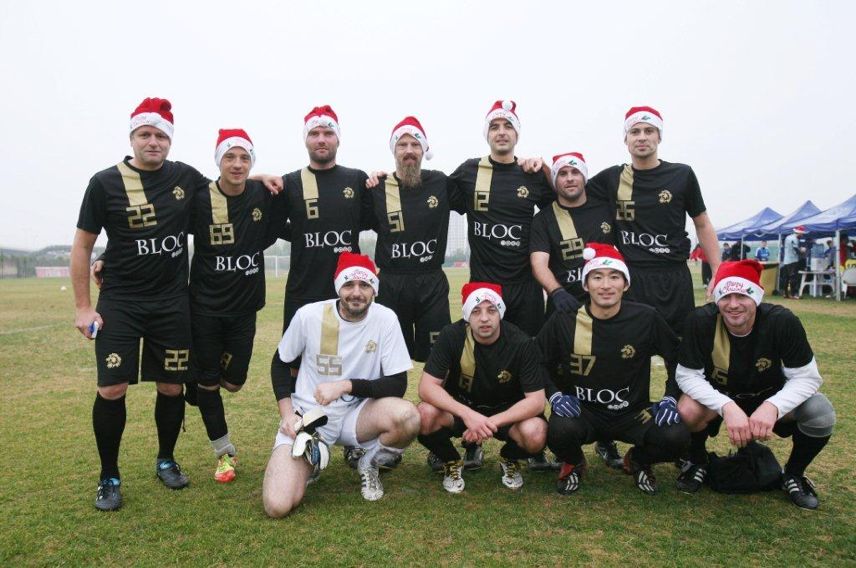 The Shanghai Lions FC were facing the Shanghai Krauts FC. It was a somber day for the Krauts as Elvis left the building. Both teams started with dazzling football and in the first 5 mins the Krauts had 2 bankable chances but failed to convert. It was another defining moment from which the sensitive Krauts never recovered. Not even a ‘Mourinho’ by Kraut coach Stöckl could get the bereaved Germans back on track.

The Lions on the other hand were in a festive mood with a guest appearance by ZZ-Top (main pic above) and took advantage of the disarray in the German squad. The Lions were motivated to the teeth as they felt somewhat belittled having to play a preliminary round as current SIFL Cup holders.

Highlight of the first half was a fast short corner with Johnny-Hobbit-O’Shea flying in the air to score a beautiful header sending both teams to tea with a 2-0 halftime score. In the 2nd half the Germans put the flag up and it was time for Xmas presents to put many Lions on the score sheet including a Fabien Barbet screamer. Their goal tally stopped at 8-0. Martin scored 2. Allan Mendel, Matthieu Witkowski, Thomas Gauthier and Benjamin Guerin all got 1.

Jonny O’Shea was voted man of the match for a 2nd time in a row.