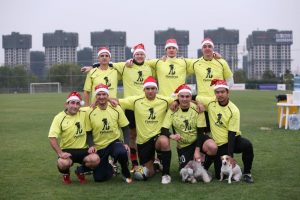 It’s an understatement that time flies in Shanghai ! This week we have been busy for the preparation of next week’s Santa Cup ! Its going to be great as we have the Veterans and the Seniors playing at the same time all at the Jinqiao Pitch. The weather outlook is excellent but unfortunately snow will be missing ! After the games we will have the games we have the chance to wish each other happy holidays and a Merry Christmas. There will be price ceremonies and a lot of beer and other winter drinks !

We had three SPL games last Sunday and have two more league games next Sunday to complete another successful football year in Shanghai !

The Krauts missed their front man Stas but took a 1-0 lead in the first half / the second half was an open play from both teams but at a 2-2 score MM FC tried to slow down the game as they were happy with the result on the other end Bilgin was fuming as he concluded whenever he is not on the pitch the Krauts are conceding and giving a way early Christmas gifts !

It was a tactical game in the first 30 minutes as ERS decided to stay deep and only had their number 9 Ondrej upfront. He still caused the Lions trouble as they gave him too much space and they were not alert enough in defense. However the Lions took the lead after a fine combination  ended at Felix who scored with a low strike. ERS responded quick and equalized after the Lions failed to clear the ball. However right before half time Mathieu of the Lions finished a quick counter to make it 2-1. At half time the Lions tried to organize their defense better and were looking for the third goal it was a great ball fm Aga which set free Azzeddine and he was not selfish and laid off the ball to Mathieu who scored his second. By now the Lions had control over the game as ERS had to come out more and it helped them to counter fast / plenty of opportunities but ERS did come close to get back in the game as they got a penalty awarded but the effort was stopped by the Lions goalie ! The Lions made it 4-1 on a counter but ERS did get a penalty again and this time they scored by Ondrej but there was not much time left on the clock and the Lions scored another two goals in the last few minutes of the game.

According to both managers it was a great game and a good spectacle for the supporters ! Century Park started in their usual fashion strong and fast and the man in form Fafa scored twice in the first 10 minutes. The marlins came back in the game by a Wilson goal but soon after Century Park made their third by a fast counter finished by Max. The Marlins never gave up and scored just before half time. In the second half a few things changed the game Century Park got a red card for their Captain and they were forced to defend more and more and Dale the Marlins goalie got injured and was replaced by field player Banksy. Banksy kept a clean sheet and the Marlins hard work was paid off in the final minutes when a long ball into the box was finished by Jon to make it 3-3 ! Great game of football and good promotion of the SPL games !  Steve the Marlins manager will have to figure out who to put in goal for the next game ! We will know it in January !

We are almost ready for the Santa Cup !!