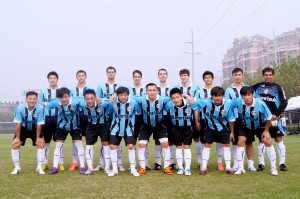 We had our first “three locations 5 games weekend” as Waigaoqiao is becoming available again after the cricketers are packing up! Its more difficult to manage but in return we are able to play more games. For the teams who didn’t pay the fee yet you need to contact me and make an arrangement ASAP ! We are already looking forward to the Santa Cup 2012 please write down the date 16 December. It will be largest Santa Cup ever with over 20 teams attending and we do hope for some early snow to make it more attractive !

As per above picture the Hawks changed into Gremio and that means more camera’s at the pitch and more samba football in Jinqiao ! Gremio was nice to Super 48 as they missed many opportunities and to be fair both Super goalies did a good job to keep the damage small.

Not the result the Lions wanted to see but they could only blame themselves by not taking their chances ! As this was a 1000 AM Waigaoqiao kick off the Lions found a few players missing due to the Halloween parties in Shanghai the night before.

ERS is still unbeaten this season and the man in form Nico Ch scored a hat-trick ! Shanghai 2000 is getting more and more used to the SPL level and come close in this game.

Bilgin’s men were not ready as they found themselves trailing 0-3 within the first 15 minutes. Cowboys were in control of the Bulls and that seems logical if you are a Cowboy!

Not sure whether this was a football game looking at the score line ! Fedja the Marlins striker already scored 14 goals this season so defenders you are warned upfront !

Next Sunday we have four games :

Hope that some of the lower ranked teams can get some points this Sunday ! Good Luck to everybody !