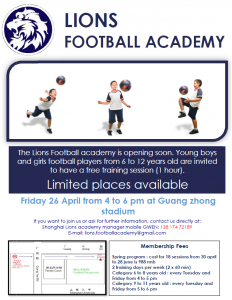 After we successfully launched our U18 team this season. We are now ready for the younger ones. We have developed a special youth training program for boys and girls aged 6-12 years old.

We like to invite everybody interested for a free trial training on April the 26th at our regular Lions training field. Please click on the flyer for our exact location. From 1600-1700 for 6-8 years old and from 1700-1800 for 9-12 years old.

The training session will be twice a week on Tuesdays and Fridays and lead by some of the best football players in Shanghai Kevin and Azzeddine. Gwen our long term Lion will take care of the management of the academy. Please contact him if you have any further question gwendallvolant@gmail.com / mobile 13817472189.

Do you want your son or daughter to be part of a real Football Club in Shanghai ? Please let them join the Lions Academy!

Let’s build together on a good future for the youngest players !

Last Sunday we had a big test of our standing as a team after months of training. Unfortunately we had a few Lions missing but with a very young 49 year old goalie we were ready to take on the French!

Coaches were very pleased with the performance as well with the team spirit which is a key element of winning game. The fact that several young lions stayed back to watch the men beat the French 3-0 with two goals from coach Garret, showed a good club spirit!

This Wednesday we have one more training at Century Park at 1800 PM before the Chinese New Year Holiday and it will be a fun training with a lots of games ! Please ask everybody to come even new players just bring them and show them what it is to play for club!

After the new year we will check all the soccer schedules of the young lions as most of you will have school competition so we adjust our training’s schedule  we will focus on games!

See you all on Wednesday 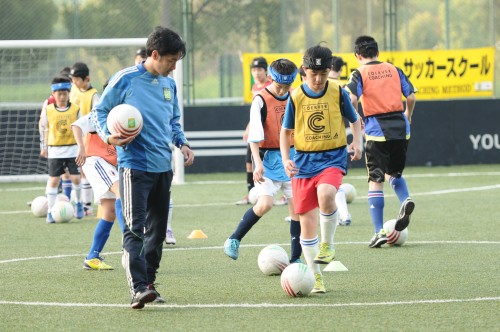 We are pleased to offer your son or daughter the possibility to improve their Football skills as an individual player !

Attached you can find the introduction of Coerver skill training’s method which is renowned world wide! We will start with the U10 and U12 group first with a maximum of 20 players per group and we will work on a first come first serve basis.

Any question feel free to ask. We will start once we have the first kids registered could be as soon as 9th of November!

It was a good training yesterday under the helm of our experienced Lions Top scorer Joel. Great artificial pitch build with the latest technology imported from Italy which makes it almost like real grass. We had 14 Young Lions U18 attending and the crowd was truly multinational ! The training focused on a proper warming up which are key to avoid muscle tears / Ball control and Ball movement in limited space / Communication with other players / Pro active play without ball / Speed + Strength / Position play 10 vs 5 where you learn to switch quickly from ball possession / keeping the ball into ball chasing / getting the ball back / Looking for open space and switch the play form the crowded area to open space by long balls / Shooting / Last but no least 7 vs 7 game fast game!

What I like about this group is that each player has his individual strong points as well some weaker points. What we train for is to improve the weaker points in order to make you a more complete player / whether its shooting with your left foot / the first touch / speed / reaction / tackles. The training is the place where we like you to try to improve yourself. The more you train the fitter you will get / the fitter you are the better you can control the ball / the better you control the ball the more confidence you get / the more confidence you have the more you enjoy the actual games!

We are looking for an opponent for our first game on Sunday 11th of November before that we have two training sessions on Wednesday to get ready for our first Lions game as a team ! Hope you all keep up the hard work and believe me we as coaches really enjoy to work with you guys ! If you have a friend who you think is a good player please bring him or her along to the training session for a trial! 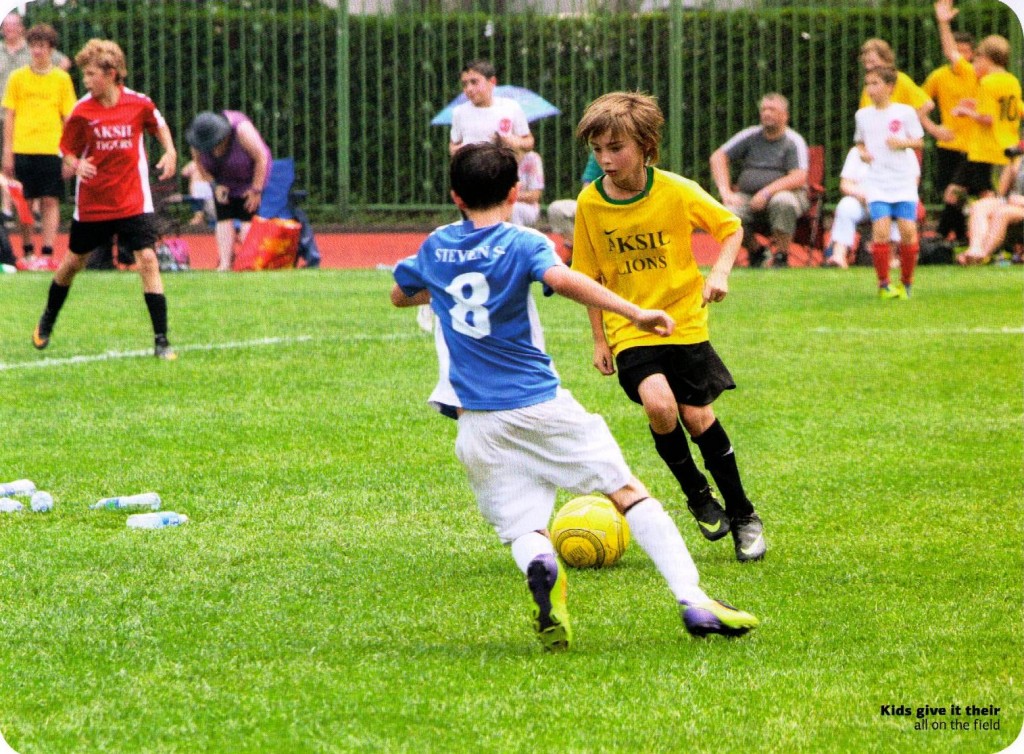 Thirty-two soccer teams facing off in an emotionally charged, passionate and exciting seven-week-long derby. Is this the World Cup? No, this is the Shanghai International Youth Soccer League (SIYSL). While now a flourishing sports league (with kids and soccer moms packing the field every week), it had a very humble beginning back in the fall of 2006.

Noting the absence of opportunities for expatriate children to play soccer in Shanghai, founder Will Dong (along with two partners who both work in international schools) came up with the idea for a city-wide sports league. “We just wanted to provide a safe and fun soccer environment for expat kids,” says Will, “a place here in Shanghai where, if you like the sport, you can come and play together.”

lacking exposure, the first season was difficult but buoyed by children participating from the German and French international schools. Support also came from Active Kidz, who submitted a number of teams in the maiden season. Based off the positive feedback – and low registration fees – membership continued to grow. Will adds, “People realized we weren’t trying to be a very commercial organization and it spread quickly by word of mouth.”

Currently, there are two types of teams in the league: school teams and club teams, which are formed by kids from different international and bilingual schools all over Shanghai. Every year contains a spring and fall season and spans a period of six to seven weeks. Teams are in charge of organizing their own training and coaches, but all teams are brought together at the beginning of each season for an orientation and rundown of the game schedule.

According to Will, the league will soon be stepping up their game and moving to Shanghai Stadium, where kids will have the opportunity to play on a more professional level”. Will attributes the coup to the growing reputation of the league, “East Asia Group (owner of Shanghai Stadium) realized that this is a very good event for the community and they told us they want to fully support the league.”

The league’s organizers are now turning their attention to finding sponsors. Holding true to their philosophy, Will says, ‘If we can get sponsors, we’ll be able to waive the registration fee, which means more teams get the chance to join.” 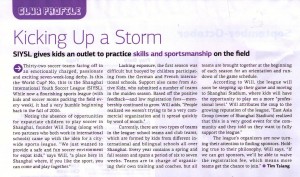