What a crazy weather! Last Saturday 20th of April, the weather was terrible, strong wind, rain and the temperatures dropping to 8 degrees! We were up for the Cup tie versus the Cosmos. 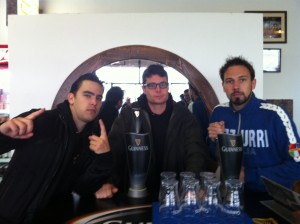 For obvious reasons our team spirit was high before the game and our intention was to start aggressive as we wanted to take an early lead. Well we got what we wanted as Fabi scored the second fastest goal in our history from a corner with a good header, the clock stood at 1 minute 20 seconds! Cosmos decided to play with one striker only and they proved to be costly for them. Our master stroke to put left- footer Gwen on the right was paying off as he scored two goal in 15 minutes. So that was 3-0 and all goals scored by our defenders! Second half we tried to focus on possession. Matthieu scored another goal and that was enough. We can give credit to Cosmos as despite losing from the start they kept on trying to score until the very end and they played hard but fair !

The semi final will be on June 1st against Shanghai Shooters for a remake of last year semi final with a clean 3-0 victory! Bring it on!

As we have very important games ahead (especially in the SPL) and as we have no games this weekend we URGE ALL LIONS to come the training this Wednesday ! Lets have a record attendance and work hard for more titles!!