Last week the Veteran Lions clinched their second Shanghai Masters tournament title by beating the Shooters on penalties in the final !

Today was the turn to the SIFL Lions Team to show why we are the Lions!

We had 12 players including 16 year old Lucas and Gwenn who noticed that suddenly he was the oldest player on the pitch ! As coach I told the Lions this was not 11 aside and we needed to score first. Quite amazingl but it seemed everybody got the message including 007 Jonny just back from the UK 15 pound more heavy but he managed to score the first goal of the tournament and his last of course …..!

Top of the group setting us up versus Teranga who beat Shooters 2-0 and had several hot blooded games ! Key for us was to stay cool and we did just that a perfect dive of Allan gave us the penalty in the last minute and god bless Azzeddine took it to send us into the Semi-Finals ! The tournament scheduling seemed to be corrupted as we ended up playing DIB in the semi final whereas they were top of their group as well ! No need to see that we were motivated to put some history right ! A Great performance of the whole Lions squad sent the semi pro’s from Shanghai back home by a one goal screamer from Jerome!

Somehow the Shooters managed to get back into the final claiming they were best third in their group !!! We were motivated by this and to me we always like to play the Shooters in any final ! So this was it ! 6 games and no goals conceded but…………………… 5 minutes before the end the Shooters scored a header by their youngest players on the pitch ! But give the Lions 5 minutes to turn around a final and they will do just that ! A great finish by Azzeddine put us level and in the last two minutes Jonny 007 as left back went on a rampage running like Usain Bolt with the ball on his feet passed it to Damien our rooky of the day and GGGOOOOOOOOOOAAAAALLLL!!!

Unbelievable good performance of the whole team 7 games all won and just one goal conceded in the whole tournament !

This means we are on the right track ! I hope everybody will come to the training Wednesday and we can have the same good start as the opening tournament in our first SIFL league game ! We will buy a nice trophee for ourselves as this was a truly memorable Lions performance !

Lions,
Please find below the schedule of the opening tournament. Tournament is from 10am to 4pm and it’s 8 aside.
For the 1st round, we are in group C and each team will play 5 games at least, and there are 2 cups to fight for. 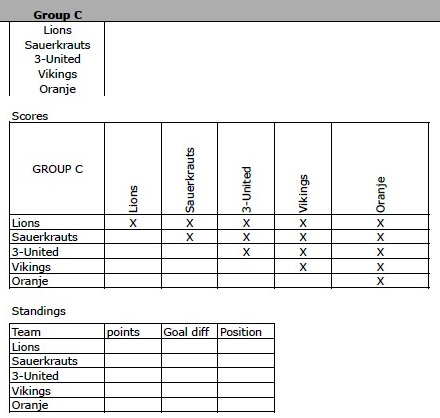 If you’d like to register for this event, it’s here