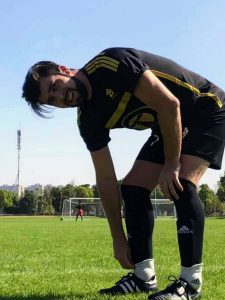 It was a warm November afternoon and we needed every player that was available to take on a technical and fit Japanese team. We had 13 players but only two natural defenders and no goalkeeper! Luckily, Laid was willing to play back-to-back games and play left back and Dave made his goalkeeping debut! We start well, controlling the game and forced the Japanese on the backfoot. The Japanese seemed content to sit back and then counter-attack with speed in numbers. Our Dutch center backs, Koen and Jesse, handled everything with ease and our new goalkeeper wasn’t too busy for most of the first half! We patiently built out of the back well, using the strengths of our back four and keeper, and the central midfield started to connect effectively with some nice one-touch passing and good movement, which started to open up the Japanese defence and one of those moves lead to the revenant Romain being played in behind the Japanese defence and scoring the opening goal. We controlled possession but the Japanese made some substitutions and their counter-attacking speed put us under some pressure. We started to commit a few silly fouls and in the last minute of the first half gave away an unnecessary freekick by fouling a player on the edge of our box as he was going towards the corner flag. We didn’t get organized quickly enough, leaving an unmarked Japanese player at the back post and he headed back across goal and his header snuck inside the post. The half-time score was 1-1.

Luckily, Adam had just come to watch the game and when he noticed our captain in goal he offered to suit up and jump in goal for the second half. We regrouped, adjusted our formation, and made a few substitutions at halftime. We started the half well, immediately spreading the ball around and attacking down the wings. Less than 10 minutes into the first half, we went up 2-1 with a goal of the season nominee! A ball out of the back found Tomas just inside the Japanese half, he controlled it well, and laid it back to Dave on the right wing. As the ball rolled back across the half-way line, Dave saw the keeper off his line and hit it first time. The keeper peddled backwards but couldn’t keep it out! 2-1! We dominated possession and created a number of chances in the second half. Our defense played out of the back well and Tyrone and Dim increased the tempo through the middle. Good movement out wide and across the front was causing trouble for the Japanese as was our high-pressure. However, with 10 minutes to go as we started to tire in the heat, the Japanese found and opening through a counter-attack and levelled the score 2-2. We brought Romain back on and continued to create chances. Laid, Dim, and Tyrone tried their luck from distance, while Jeremy had a one-on-one opportunity saved. With two minutes left, Koen sent a goal kick forward, which Dave flicked onto Jeremy, whose touch put Romain clean through who finished with an expertly placed finish leading us to a 3-2 victory!

Well done Lions and you can click here for the match statistics.