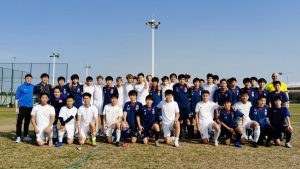 It was a perfect day to play as it felt like spring just had arrived in Shanghai with the temperature reaching 17 degrees. It was a working Sunday ahead of the CNY holiday but it was great to see many parents come to watch and support our U18 team. Japan FC U18 team had more than two teams but the older ones got the priority to play first.

Our plan was to start fast and try to look for early goals. When Ryan tried his luck in the first minute with a long-range from the right it was too hard for Ryu’s father who helped the Japanese team as a goalie. Maybe the goal came a bit too early as after that we didn’t play well as there was no connection between the defender and the midfielders and no connection between our midfielders and our forwards. In between the lines, there was so much open space as the defense was sitting too deep and our forwards stayed up too high. We got punished for that by Japan FC U18 who with their quick feet and passing had no problem scoring two goals in 7 minutes taking advantage of the free space we gave them. Guess that was the wake-up call we needed and we started to play better on an attack over the left the ball was not cleared in the Japanese box and Ryan didn’t hesitate to equalize for us. In the last minutes of the first half, we started to play very well and took a 3-2 lead by a tip-in from JP.

The second half was much better from our side with our defenders and midfielder and attackers playing like one unit and it was much harder for Japan to get the ball in their possession. We enjoyed our passing game and everybody kept their tasks within the team. We came very close on several occasions to score one ball was saved by Ryu from the line after his father was already passed. It was Philipp who scored a nice goal placing the ball in the far left corner to make it 4-2 for us. Jason played a few minutes in the end. By the way, it was his last match for the moment as he will go back to the USA to finish high school… We will miss him of course and wish him all the best. Japan scored a nice goal at the end with a long-range well placed shot over Sean our new goalie.

Overall it was a good match for both teams and we like to thank Michael the father of Alexander who did a great job as a referee. This coming Thursday we will have no training due to CNY however we will train on February 18th, 2021. On February 21st at 13:00, we will participate in a mini-tournament with the older youth players and a few senior players against 4 Japanese senior teams at Waigaoqiao.