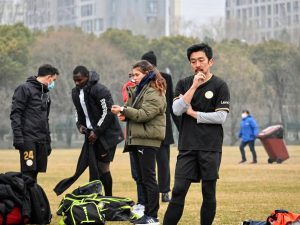 Last Saturday, our senior team was up against Voodoo. This team is actually ranking No. 2 in the SIFL league. A strong and fit squad which have been playing together for many years. As we are playing with many of our youth players we knew it wouldn’t be an easy match. Once more, our biggest problem was we were still lacking didn’t have a goalkeeper… Our youngster Philipp (once again) offered to play goalie for that game.

We started the game well playing composed as a team and not giving away anything. We also got a few occasions that we managed to get through the Voodoo’s defenders but were missing the final shot or pass. It looked like we could go into halftime with a 0-0 scoreline but disaster struck when out of nothing but just a goal kick we kick the ball against a Voodoo player and it ended in our goal.

At halftime, we tried to stay positive and thought if we can get a goal back it should change the game. It went well for 10 minutes but we gifted them the 0-2 after our goalie didn’t clear the ball at first and lost it afterward… The goalie syndrome which is haunting us this season proved to be too much and we saw all our hard work disappear and the last 30 minutes became frustrating and in the end, we left the field with a 0-4 loss. Next up are the Kickers and hopefully, we will have a goalie to help us out.