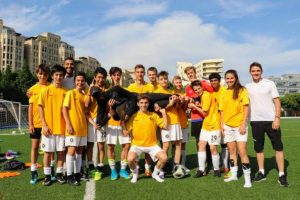 The weather was great and the pitch was great at Concordia for our youth match against Stoke City !

Stoke started strong and played high pressing it caused us some problems in our build up but thanks to Sam our goalie we kept zero. It was a free kick by Philipp that was to powerful for the Stoke keeper that gave us the 1-0 lead. Five minutes before half time Yusuke had a great low strike to make it 2-0 !

In the second half Stoke showed character and managed to get back in the game by their striker Tomassi 2-1 but soon the Lions scored after a fast counter on the right flank which was well finished by Victor our Brazilian winger to make it 3-1. Stoke came back again but this time the Lions responded in two minutes as Matty back from injury made it 4-2 ! At this stage the lions dominated the game and could have scored a few more goals but it was Yusuke second goal which made it to the final score 5-2 ! The young lions worked hard during this game and showed good team work and discipline !

At the end we had a moment to say good bye to Shingi who graduated and is on his way to the USA for his future life ! We will miss him for sure and thanked him for the role model he was for the team and we hope the young players learned from his mentality and passion for the sport !

Great game and great performance from the Young Lions !