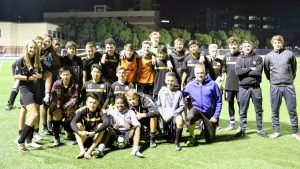 Last Friday our young Lions were up against Reunited ! We had a large squad and our intention was to let everybody subject we had a favorable score. The problem we faced was that Reunited had several players close to the senior level which made it hard for most of our youngster. One or two years makes a big difference in the football development and physics !

We started the game well with Matty and Till on top and we played good combinations. Julia, our captain, played solid in the middle trying to block the reunited midfielders. After 30 minutes Reunited opened to score with a low strike hard to stop for Sam our goalie ! Just before the end of the first half we got a poor decision of the referee against us and he gave Reunited a penalty. It was 2-0 at half time.

We felt that we were still in the game as long as we could get one goal back. This was our intention in the second half but ten minutes in we got a justified penalty against us. This goal was a real blow to us and it was hard to keep our fighting spirit alive. But with Shingi coming in we started a revival offense and got two great goals back to make it 3-2 ! However too soon after it they scored 4-2 and 5-2… We created more opportunities and scored one more goal as well Matty hit the post with a fine placed strike. Our substitutes were on their toes all the time to cheer on the team which was great to see !

In the end it was 7-3 for them but we gained a lot of experience from the match and our fighting spirit was impressive ! That’s why we still could smile after the match despite losing !

This Friday we are invited by Dulwich Earthquakes to play a friendly match at their grass field 19:00 kick off ! There will be food and drinks organized by them after the match so parents are more than welcome to join the event !

We will work hard at training to get better and better !