Part of living in Shanghai is that people come and go but sometimes people stay for a longer period. In his case Charles stayed more than 12 years in Shanghai. We gave him a great farewell party last Friday at 3 on the Bund and many Lions showed up to pay their respect to hardcore Lion. In a speech by the President we tried to look back what he achieved in this period as family man, player and club vice president. The list was long as after a quick flirt with the Shooters he realized that his life was and still will be with the Lions.

Here is a quick summary of what he has won as player:

Charles has been instrumental in helping the Lions to change from a Football Team into a Football Club he had his own style of communication which was direct and clear. With his expertise build up by his own team building Company he became a specialist in organizing events especially related to sports. For his contribution to the success of the Shanghai Lions Football Club for more than 12 years he received the honorary title of “Lions Legend Gold” member. We wish farewell to him and his family with a safe journey back to France and hope they can settle down well ! For us we are left with a big gap in our organization but we will find other Lions willing to offer a helping hand to carry the club forward ! Charles on behalf of all Lions players in and outside China we like to say “XIE XIE” for everything you have done for the club. 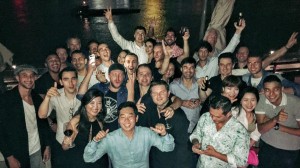