Lions voted as Shanghai Sports Team of the year 2012 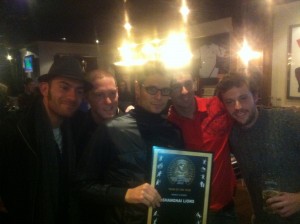 Yesterday was a special day for the Lions as we were voted Shanghai best Sports Team for the third consecutive time by That’s Shanghai Magazine. Our award was the “people’s choice” which made us even more happy because it meant that many people recognized us as the best club in Shanghai and voted for us. A big thank you to all the people who have voted for the Lions and a big thank you for all the Lions, you truly deserved this award! Every single Lion have contributed to the award from the U18 until the veteran’s and from Saturday to the Sunday Lions ! Magic is the word !

It was good to see so many Lions present to receive the award at the Camel Bar and it showed our true spirit. I made an incredible journey of over 12 hours to arrive just two minutes before the presentation. Here is my story:

To me we are on long journey together and this is just the beginning and the moral of the story if you really want to make something happen you can ! All of us can that’s why we will have the best teams of Shanghai and that’s why we will continue to win trophies !