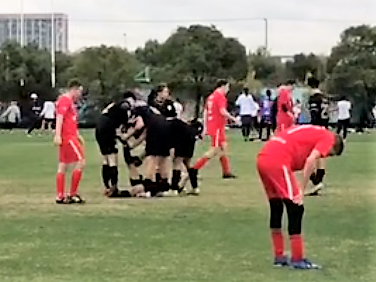 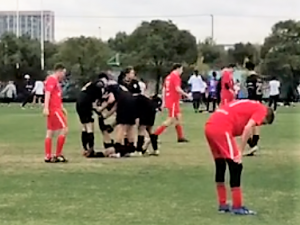 After our last minute disaster last week against Reunited, our goal was to get the three points and turn around our misfortune. For this game, our first team was up against the Shanghai Vikings… a mature team but not the fittest of the SIFL league. Therefore, we knew we had a chance to get the win. While Juliano is still injured, we were happy to have Marcel, a new German goalkeeper to help us out.

We started well not giving anything away and tried to play on the counters. The Shanghai Vikings opted for long balls only but didn’t have many players going forward. One of their best players was unlucky and got injured after 10 minutes. We took the lead after a free-kick which Philipp took well and put the ball at the low left corner. We did get opportunities to extend the lead but we were not sharp and focused enough to kill the game.

In the second half, we tried to score the second goal quickly but instead, we almost let them score… A wake-up call for the Lions! Within 15mn to go, we got our reward with a good combination between George & Jason. It saw George’s header hit the crossbar but Kyle was alert and scored what we thought was the winner. However, a small defensive error put them back into the game. Therefore, we had another 10mn of nerve-wracking game time before the referee decides to whistle the end game.

Our players getting injured in the last moment of the match and the coaches trying to fix the problems… It was hard at the end of the game and we shouldn’t get ourselves into this position in the first place… Still, we got our three points and that’s what counts at this stage.

Next up will be a hard match against the Azzurri who won the league last season. We have nothing to lose but and will give them a hard time! See you all on Tuesday.