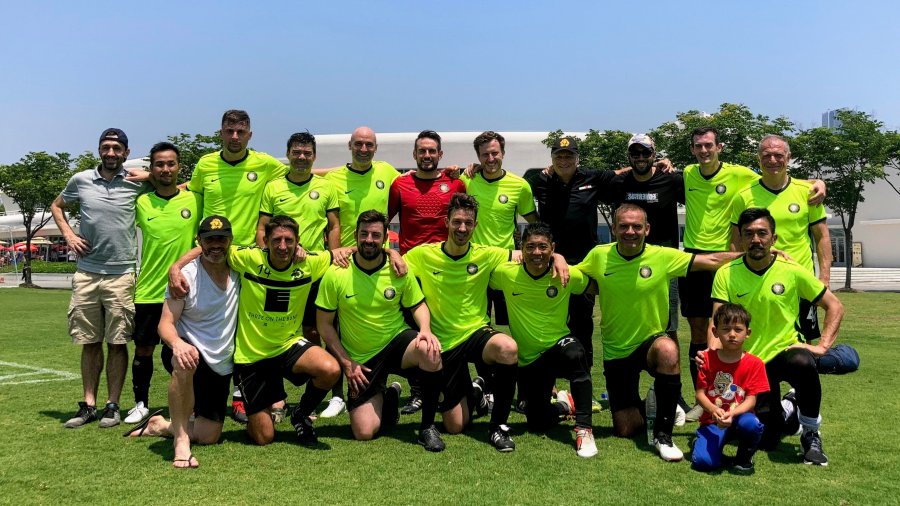 On this beautiful Sunday, our veteran team was up against the Shanghai Emerald for the SPL Veteran Clasico. For this last game of the season 2020/2021, it was nice to see some old legends coming back to play. Also, we had 2 new players joining us as we started to recruit for next season already.

In the 1st quarter, the strategy was to let the Emerald make the play and to wait for a counter-attack. At the beginning of the game, Emeralds had their 2 top scorers missing… We were obviously happy taking advantage of that. We had a lot of free space on the wings and within 5 minutes Nicolas B., on the left wing made a great cross which Tomas finished well with a header. It boosted our spirit and we continued to play strong. Five minutes later, we had a replay of the 1st goal with another assist of Nicolas B. with Tomas put it in the wide corner. Our keeper Clement made a couple of good saves. Unfortunately, we got surprised by a quick turn of Emerald’s forward Steve. However, we were quick to respond with Tomas again scoring a hattrick in just 20 minutes. 1-3 after the first quarter.

In the 2nd quarter, Emerald had their squad completed but we kept our team compact and waited for another opportunity. It came from a free-kick at the edge of the box which Tomas laying off the ball to Big John who blasted it in the left corner. Then, Emerald started to put more pressure and caught us off guard after a long ball from their keeper which sliced through our defense. Clement got left alone surrounded by 3 Emeralds… nothing he could do. 2-4 at the end of the 2nd quarter.

In the 3rd quarter, we started to lose our composure and forgot to play. Within a couple of minutes, Emerald scored and we failed to create any chances. With 20 minutes to go, we had to defend our 3-4 lead.

In the 4th quarter, the killer blow came right after the start when we lost the ball at a dangerous position. Our defense got put off guard and Emerald’s winger scored a nice goal from a long-range well placed shot. With the hot temperature and lack of fitness, our legs started to get tired. On another run from their fast forwards, Big John came shoulder to shoulder with their striker into the box… penalty given by the referee. Suddenly our lead was gone with the wind… we tried to get another goal but failed to do so. In the end, Emeralds scored the final goal of the match. Final score 6-4 for Shanghai Emerald FC.

While it’s obviously disappointing losing the game after leading 1-4, let’s take the positive. It was good having Big John, Nicolas & Jack back in the team putting strength back into the team. After the poor game versus Japan, we got some composure back into the team. In the end, we fought well into this SPL Veteran Clasico. 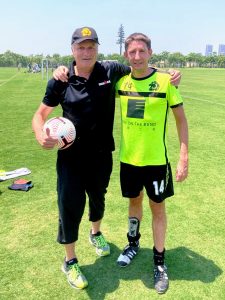 Last but not the least, this was probably the last game of Sylvain… He played for the legends since the beginning of the SPL veteran league back in 2012. He has been an important player in our squad and we’ll surely miss him. We wish him all the best with his next venture back in France… Au revoir monsieur!

The beers after the match did taste very good and we talked a lot about how to do better next season already. This season, we were simply not fit enough, and many times, we got punished for that… Let’s work on it for next season.

Well, we have the whole summer to work on our fitness. But 1st, let’s celebrate our friendship at our annual gala dinner at the Shanghai Town & Country Club on June 19th, 2021.

Cheers to the Lions!
Freek