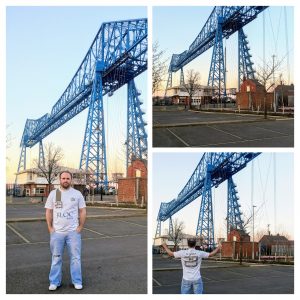 We tracked down Johnny O’ Shea a player who have contributed a lot to the success of the Lions on and off the pitch !  We asked him the following questions to get an idea how he has been since he left China and the Lions !

Interviewee of the month: Jonathan O’Shea

FB: Johnny where do you currently live ? You are still single ? or married with two kids like Charly ?

JOS: Firstly, I live in a town called Middlesbrough. Yes, the famous one built the Sydney bridge and the team that had Juninho, Hasslebaink, Ravanelli, Emmerson, Boksic, Paul Ince and Paul Gascoigne all playing for them. I am still not married and have no children, however, I am putting the weight on like Charly. I am dating, so we will see where it goes.

FB: Are you still playing soccer and if yes what team if no what you you do in your free time ?

JOS: I don’t play 11 aside any more over here because I don’t enjoy the style of play, the weather and most of the all the way the people behave. They just want to fight all the time. The football played in the Lions team was far more enjoyable because we got the ball on the floor and passed it around. I do however, play 7 aside on a large 7 aside pitch. This game is quick and is a very enjoyable game to play in. Unfortunately, I snapped my groin over 5 weeks ago and haven’t been able to do any form of sport at all since then. So my fitness it deteriorating too quick for my liking.

FB: What do you miss the most from living in China and what you don’t’ miss at all ?

JOS: I miss many things in China. The ease of transport was a great thing. The metro system worked like clock work and was extremely reliable and cheap. The taxis were cheap and easily accessible. I miss the hot weather and the enormous choice of restaurants, bars and coffee shops to go to. The atmosphere in China is one thing I miss a lot of. Here in England everything shuts at 6 at the latest and then everyone goes home to just sit down and laze on the sofa. When it is dark, it seems as though it is a ghost town. In contrast, Shanghai seems to have a second wind at night and many more great things open up and come to life – the night markets for example. The city of Shanghai is extremely cosmopolitan and I really miss being able to just meet up with people on an evening or during the weekend and not one of them is English. It is so refreshing to have great company from many different countries throughout the world, especially Europe. This brings me onto the company of the Lions. One major aspect I really miss from China is getting up on a Saturday or Sunday morning (even at 6 am, it made no difference to me) and think, ‘yes I am playing football today with the best team in Shanghai’. My reasons for this are because the style of play, the mix of nationalities, but most of all the family that all the lions players made the team to be. There are many things I miss about China (especially the girls in the summer when they wear those tight skimpy short) and could keep on going.

What I don’t miss about China is mainly the enormity of people always wanting to go to the same place at the same time. The Chinese did not know how to do things on their own or how to queue. They definitely could have been a bit more respectful, but I grew to enjoy this. It’s part of the package. One more thing I didn’t like, but it only happened on a very few occasions, was how the Chinese seemed to only be interested in right there right now. They could not think about the long term of things. So they tried to rip me off when trying to get some things sorted for business. If only they thought about dealing in a better way, then they would get my business for the long term.

FB: What are your best memories playing for the Lions ?

JOS: Memories for Lions??? Well, I have quite a few. I remember the first time I turned up for the lions during the summer tournament. I had only arrived in Shanghai the week before I Charly had replied to email right away asking me to come along and play. Straight away I felt at home and enjoyed how we played football and how everyone was given an opportunity and welcomed in. I trained with another team that week, and within 5 minutes I knew the Lions team was for me. I remember winning the cup and right after winning, we all jumped into the plunge pool. Some great celebrations went on. Latina after the Sunday games was always fun. It was great food and a really good opportunity to drink. You know I liked to have a drink or two. I remember my birthday quite well and seeing Francois stuck in the bush after he had drank the Mongolian Baizhou. That stuff was disgusting! Winning team of the year, two years running. It was always nice to be stood there collecting the trophy with the team. And of course, you Freek. Now I remember you and your great management team talks before the game (FUCK Them all). But what was great about you, was how you always put the team first and always made time for each individual even with your hectic schedule. Oh, and how you always did your long chant on big celebration nights. I honestly don’t know how you can last for so long.

JOS: If i did wake up from a nightmare about the Lions, it would be realizing that it is no longer there for me to come and visit, or that the team has just capitulated and lose every week 6, 7, 8, 9 to zero, just like the Anzacs.

FB: We all remember your excellent performance during the Hangzhou tournament and sharing a room with Chris Martinez we wonder what kind of bed time stories he have told you ? can you share one or two ?

JOS: Honestly, I can’t really remember the bed time stories I had with Chris, but I do remember have long, deep and meaningful stories about his wine business and how the competition is stifling his.

FB: You became famous as our Shooters killer as you seemed to play your best games against them what was your motivation like ?

JOS: My motivation for playing against the shooters. Them being British of course. My self being British, every time I played against them I had to beat them. They had British arrogance when ever I saw them and I had to knock this down. It’s always nice to beat the British scum…

JOS: I might have been able to fly when I first joined the shooters, but all the amazing food and happy hour deals in Shanghai impacted on that ability and weighed me down.

FB: What was your best goal for the Lions can you describe it ?

JOS: Not entirely sure which was my best goal, I can’t really remember them all. But I do remember scoring a header against the Germans. We took a short corner and I could hear you shouting to not take it short. Jerome crossed it in and there I was out jumping everyone and powering it into the top corner. There was another goal in which I rounded the shooter’s keeper with my right foot and placed it in the goal. I remember Azz saying he didn’t think I was able to do that.

FB: What changed for you after Brexit ?

JOS: When it comes to Brexit, I knew for ages that we were going to vote out. Everyone up North has nothing here and therefore we were all saying vote out. Since the vote, nothing has changed. All we hear is people moaning about it in London, and up in the North, the Government do nothing to assist us, so we would rather see what the unknown brings than just stay in the same terrible situation.

FB: Do you plan to visit China any time soon ?

JOS: I really want to come back to China, I always talk about it and say that I really hope to visit there again. I intend to play for the legends one day now that I am the correct age. I am now a primary school teacher and am looking to move abroad and work in an international school. I should speak to Dave or Garret. They may be able to put a good word in for me.

FB: If we organize a Lions Match in France would you come over ?

JOS: If you do arrange a game in France, I will definitely come over and play, if it is at a date that I am free. Due to being a teacher, I only have the holidays to come over. But I would love to play again so please arrange it during the holidays.

FB: Have you met other Lions players abroad ?

JOS: Outside of China, I have met up with one of the Lions players. This was Allan. We were both partying on the Island Hvar in Croatia and realized we were both staying in the same hotel. Id like to visit more players, and intend to hopefully go over to France one time to catch up with some.

Great to hear from you Johnny and indeed we hope to see you back in China one day !