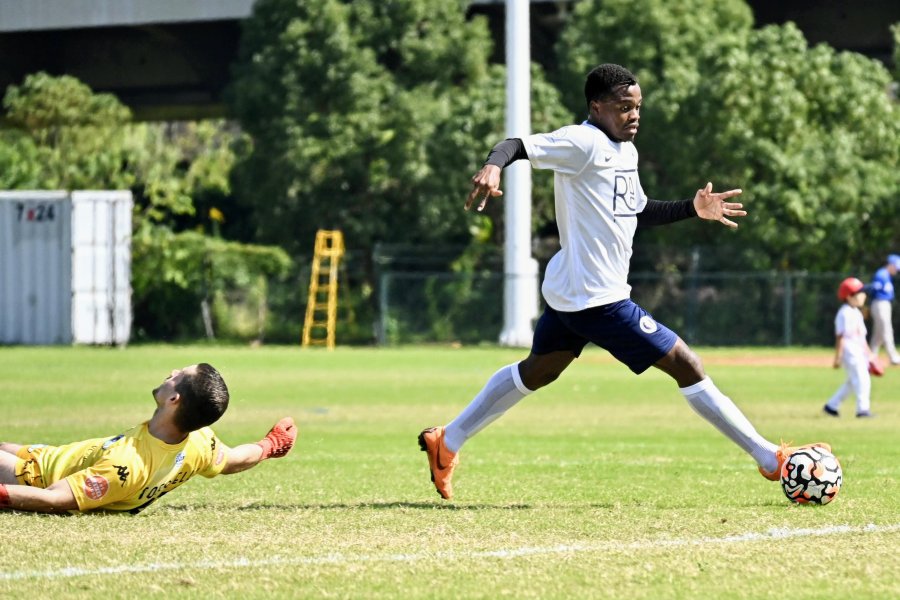 It was a beautiful day last Saturday with a pleasant 22 degrees. Perfect weather for a great game of football. For this SIFL Cup game vs. Cosmos, we had a large squad with the objective of trying out a couple of formations as it’s still early in the season.

Our spirits were lifted before the game already:

Our start of the match was good as we were aggressive enough to get back the ball quickly & efficiently keeping the ball in possession. From a long kick from our goalie, our striker Nicolas got on the run at the edge of the Cosmos box. With one-touch, he scored for an early 1-0 lead.

Cosmos seemed to be a bit off guard by the Lions’ powerplay and soon after Cyril went on a nice solo effort and his final pass was to Florent who made a couple of moves to make sure the Cosmos goalie was out of position to blast the 2-0 in the net. On their side, Cosmos FC did manage to come behind our defenders on a few occasions from the wings. One of them resulted in a scramble in the box but Henry cleared the ball from the line. In the second attempt, it was Tim who made a heroic save to keep our sheet clean.

Our forward play was still good and this time it was Peter who showed us how to finish with total composure. With 2 moves, he got free at the edge of the box. Without too much power, he scored in the left corner leaving the Cosmos goalie helpless. Samad came in the squad on the left-wing and it helped our play as he is always a threat. On one of his crosses, the ball flew over the keeper for the 4th goal.

Being 4-0 up, we urged the team to keep playing in the 2nd half. With new players on the pitch, it was a real satisfaction that we didn’t drop our level. Actually, we had our best spells in the second half as we managed to keep possession for long periods of time. Also, it was good that our forwards started to combine with each other. After a couple of combinations in the Cosmos box, it was a simple tip in for Peter to score his second, and soon after Florent showed his power with a great low strike which left the Cosmos keeper helpless on the ground.

We did get a couple of more opportunities towards the end but we didn’t finish them… Never mind! This SIFL Cup game ended up with a 6-0 win for the Lions. What stood out in this game is that every player on the field and the players who came in as substitutes and the injured player who came to support the team were ONE UNIT of LIONS!