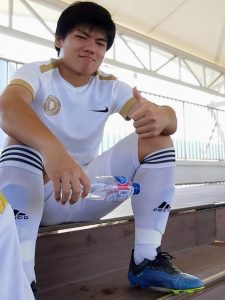 It was a blistering sunny day down at Wellington High School. The Lions were prepared early to do a professionally run warm-up and witness Patrick squeeze into some incredibly tight white shorts.  Our focused warm-up seemed to work, as within the first minute the Lions had worked their way up in the pitch, in neat triangles, and were 1-0 up within seconds. Our squad was very young… probably the youngest average ever for the Lions in SPL.

Our youthful energy paid dividends as we quickly added to the scoresheet. Within 20 or so minutes the game was already ours, a scoreline of 5-0 allowed the Lions to relax. Galacticos made some changes and started to get on the ball a little more, Lions didn’t panic and cut out any potential attacks.

Half time arrived and the boys were told to continue playing with the same enthusiasm but to be wary not to let the opposition play. We responded well by adding to our goal tally, and it was clear that the game was out of reach. There were some special goals amongst the onslaught, particular mention must go to Matty who added 4 goals to his total. Furthermore, it’s important to congratulate all of the youth players who came down for the senior team. Excellent performances all around and this game will be remembered as Lions youngest average team ever. Seb 3, Romain 2, Matty 4, Tomas 2.