We are not sure whether it was related to the pollution index hitting 300 but we played one of our worst halves of the season ! The give credit to Japan they played well and were faster and fitter than us. Our build up was to slow and it was easy for Japan to close us down. They were dangerous on the counter attack with all of the Japanese running forward with Maglev speed. We were out ran on the 0-1 but got a goal back with a nice header of Adam to equalize. However close to half time Japan had a good pass over our defense releasing their striker Innoue one on one and Japan took a 1-2 lead. Obvious our half time talk was not pretty we needed to stay in the race for the title. Adam in fine form recently scored another great header to make it 2-2. On the other side Japan had another fast break and could have taken the lead again but in the last minutes we clinched the winner from who else but Adam again ( netting his 10th of the season).

After the game we watched Cowboys-Gremio drew 3-3 both will be our next opponents and these are the big games we are looking forward to. We need to work hard to improve our game so we expect everybody to join the training on Wednesday. As well we need you to register on line and on time so that we have enough time to make the teams for the important weekend. We have now won 8 games in a row but have the two most important right in front of us ! 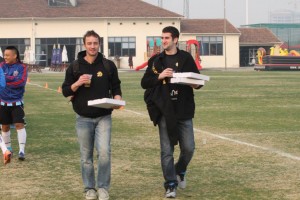