We went to Xiamen to defend our title of last year. This year there were 14 teams divided in two groups each playing 6 games before qualifying for the quarter finals. Early in the morning we had to listen to a 30 minutes boring speech of the local government just by standing there you started to sweat already due to the heat and humidity ! We only had 9 players including the President who could have been the oldest player in the tournament but we started to play well game after game however we got a tough game versus the Chinese Army whose only intention was to fight instead of playing football. The tournament organizer for the occasion had 5 security guys running around the fields and now we knew why ? Luckily we killed the Chinese Army 3-1 and made it to the quarter finals against another Chinese team.

Now the heat and the exhaustion started to take its toll on us but it was the same for the opponent so we kept fighting and made it to the semi-finals.

For the semi’s there was a draw to pick the teams and we had to play against the strongest local Chinese team with some (old) ex pro players. Lack of focus cost us a goal in the early stage of the game and it’s very hard to come back from 1-0 down on such a small pitch. The Chinese had plenty of subs and the scored another  goal we quickly got one back by Patrick who only scores on important occasions but it appeared not enough as we lost 2-1. This team later won the final and we won the third place not good enough but after 180 minutes of football we could still smile when we received the medal to show our good spirit and an apology to Azz needed to be made as he has given all of us so many opportunities to score during the day but all of us missed many of those……sorry AZZ !

We decided to skip the beach party and have a dinner by ourselves where we had to say goodbye to Erwin who is going back to Holland. He made a great impact on our team in the few moths he played for us and we hope one day he can make it back to the Lions ! 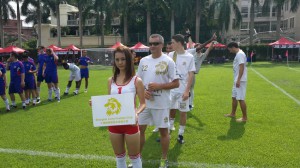 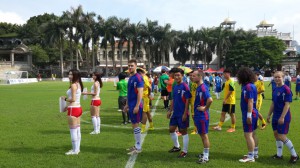 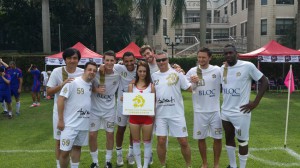