Lions one step closer to the SPL Championship !

There was no game for the Sunday Lions but the competition was playing. The cowboys our only competitor left for the title race slipped up against Japan. The week before we had a tough game against Japan but got three points with a narrow 1-0 win. The Cowboys however lost 3-1 and with this result the gap between us is now 8 points with only 3 games left for the Lions and 4 fr the Cowboys.  We need a win against the Marlins to finish the job this coming Sunday. We expect all Lions family and friends to come and watch this game in Jinqiao 1400 kick off !!

The veterans were kicked out of the Cup tournament by Ireland. They struggled to have a full squad and were in the game until the last 20 minutes with 1-1 on the score board. Two unnecessary goals gave the Irish a 3-1 victory.

A few Lions and Young Lions put on their running boots this weekend ! Max our veteran was one of the 200 foreigners taking part in the North Korea half marathon  as it was open to foreigners for the first time ! Hope he will make it back and we are looking forward to his stories ! A few young Lions took part in the Jinqiao 8k race and Rick (15) came out fastest clinching spot no 40 out of 4000 runners ! Good to know we have a fast Lion in the making !

All in All a positive weekend for the Lions !

Lets prepare well for the Marlins game and we want everybody to come to the training ! 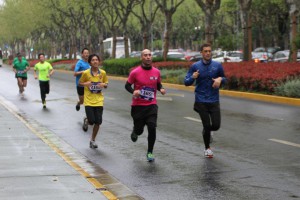