Lions out of the SIFL Cup 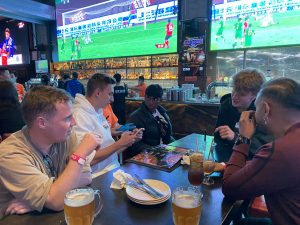 With a couple of players injured, our senior team had a thin squad last Saturday for a SIFL Cup game. We were playing against the Krauts a German team with a lot of length and strength in their team. As we have started poor in a couple of games we wanted to change it by not giving away free-kicks or corners but also keeping the ball longer into possession. The pace was slow from both teams and it seemed to go well for us however after a corner for the Krauts in the 20th minute we saved their header but after that we let them cross in again and we couldn’t stop their effort and let them score. We did create a couple of opportunities with FL & Tiger coming closest to scoring however we gifted them their second goal when a Kraut’s player clearly offside unspotted by the linesman as he fell asleep in the afternoon sun ran into our outcoming goalie. It was a penalty for them and we were 2-0 behind at the half time.

Enough was enough we were fighting for a comeback with a superb combination in the midfield we set Samba free and he hit the post with a great strike that was a warning to the Krauts. We did get a free kick in a good spot right in the middle of the goal but Pat’s Skill or his Wifi was not on as the ball went into orbit and has never seen back. We did get our reward by a foul in the box and Tiger kept his cool and scored the penalty. With 5 minutes to go, we all thought Pat would score the equalizer when he suddenly found him free right in front of the keeper but his effort went wide instead of in the goal.

It was a frustrating afternoon as we’re already out of the SIFL Cup… In the end, the Krauts didn’t create anything during the 90 minutes but got away with the win. Next Saturday, we play them again for the league and we are all motivated to put everything right. Let’s Go Lions!